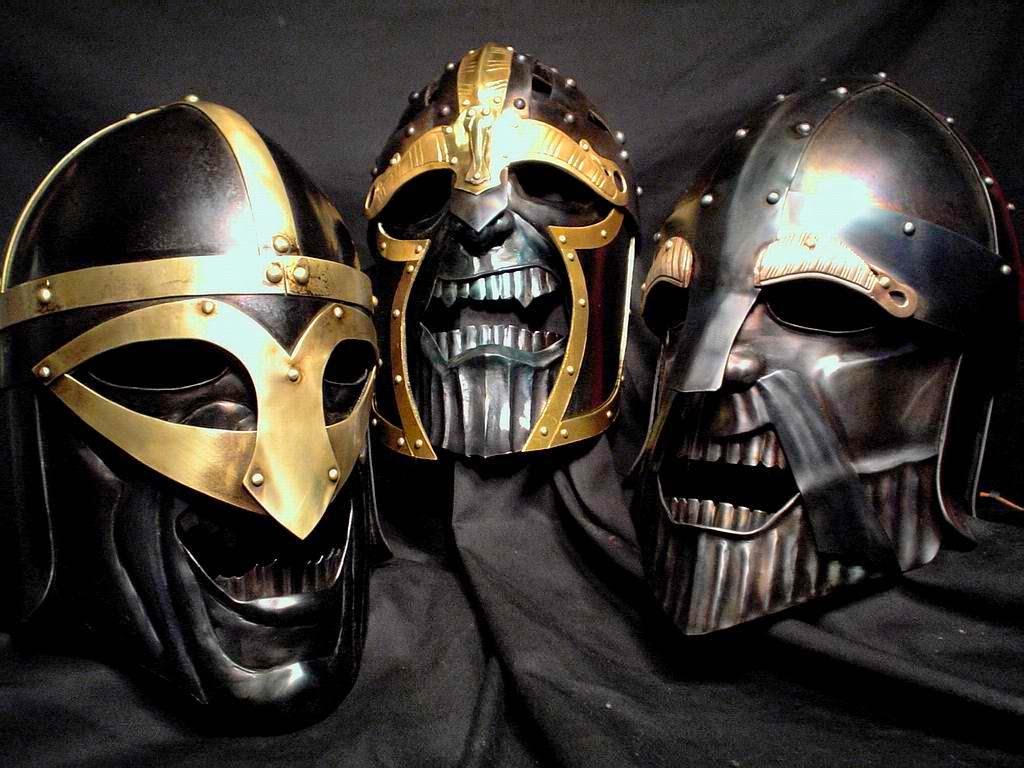 These helms were crafted for triplet brothers who would one day rule a forgotten kingdom. Legend holds that when the brothers came of age they would each be gifted a helm from their father. Rare alloys were used to strengthen the helms and they were accented in gold. Daily since their youth the triplets passed the helms in the great hall of their castle. They were constantly reminded they would earn the helms as a symbol of their royal birthright.

Soon they came of age and the brothers were impatient and wanted to inherit their lands and vassals. Their father the king was venerable but still had many good years left to sit upon the throne. The brothers became tired of courtly meetings, schooling and having nothing to call their own. It is said that they had eccentric hobbies which included toying with the dark arts and necromancy.

Perhaps it was the former which lead them down their path of destruction. The legend becomes blurred soon after but a rash of horrific murders plagued the royal family. The king was slain in his sleep and the queen had a terrible accident with a spiral staircase. The captain of the guard was labeled a traitor and hung from a tree in the castle courtyard. Not long after the triplets took their seats of power and divided up the kingdom.

Sages argue what happened next but sometime later that year the brothers were found dead. Near their bodies were the royal helms crafted for them so long ago. Each brother had a terrible death grimace upon their countenance which was reflected perfectly on the helm. Some say they made a dark pact with a demon or arch fey. The brothers were arrogant and did not uphold a bargain made in blood. The Three Princes were tossed into the sea as the people felt the helms were symbols of evil. They have never been found and remain only as fable to spook naughty children throughout the realm.

Property
While wearing one of the Three Princes you gain a +1 to AC.

Wicked: When the wearer contemplates or undertakes a benevolent act, the helm seeds the mind with doubt and rationalizations to work against the act.

Evil Imprint: A good creature that touches the helm experiences strong revulsion. If it maintains contact with the helm for 1 round, the creature takes 3d6 psychic damage. That creature continues to take this damage each time it starts its turn holding, carrying or wearing the helm.

[Attuned]: Invoke Fear (1/day): Each enemy within 30 feet of you that can see you must succeed on a DC 13 Wisdom saving throw or become frightened for 1 minute. The target can take an action to make a DC 13 Wisdom check, ending the frightened condition early on a success.