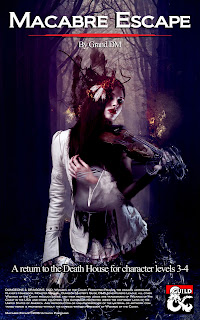 At the edge of this forlorn place we located an immaculate row home. Once a wealthy family lived there which committed damnable sacrifices. The choking mists forced us inside this sorrowful and malevolent estate. Within we found a life of luxury twisted with unsettling madness. This sentient abode tormented us until we found a way to depart its corrupted halls. The antiquity of the evil in that place seeped into our dreams. After some time we steeled ourselves for those waking night terrors. Unfortunately, the wrathful abode was not done haunting us. As if swallowed by a morbid oubliette, we have returned. I fear our prayers will go unanswered inside the macabre escape tunnel of the Death House…

I decided to test the water at the Dungeon Master's Guild with an adventure used in my own campaign. I really enjoyed the Death House, and thought it had more stories to tell. There is just something wonderfully creepy about a house which is sentient. It could be used as a nemesis all throughout a Curse of Strahd campaign very easily. Be warned, Macabre Escape is very dangerous, yet some encounters can be avoided by careful players.

Macabre Escape returns the PCs to the Death House. It can also be used as an addition to the original Death House adventure. As a living entity, the Death House revels in the torment of both the living and the dead. It has many secrets still yet discovered, one of which is the original escape tunnel built by the Durst family. This scenario has enough material for a complete four to six hour game session. Although designed with level 3-4 characters in mind, the Macabre Escape can be tweaked to accommodate higher level groups.

The door is open … What are you afraid of?