In memoriam, I wanted to talk a bit about Dave Hargrave aka The Dream Weaver. Today would have been his birthday as he was born May 25, 1946. Most grognards know him as the author of the The Arduin Trilogy. They are, in order, The Arduin Grimoire, Welcome to Skull Tower, and The Runes Of Doom. For the uninitiated, Dave was way before his time in terms of contributions to role-playing games. Sure, modern game designers and players alike often criticize what seems like a bunch of house rules cobbled together. But what is important to remember is this was 1977, just a few years after the release of Dungeons & Dragons. This is the same year that Star Wars exploded onto the big screen! Dave was not only writing, but publishing arguably the first gonzo RPG material.

Arduin was the off the hook, kitchen sink of campaign worlds! Between the brutal critical/fumble charts, super-science, and unique fantasy elements, these little books were something special. At the time high fantasy similar to J.R.R. Tolkien’s Middle earth dominated the RPG scene. Hargrave took that foundation and turned it upside down…and then kicked it a few times. The take away from Arduin has and always will be, that mixing genres and being imaginative is a good thing.

Hargrave’s Arduin was the original 0-level funnel where characters would often perish in some gore-laden way. Dave, a Vietnam veteran, actually commented on Arduin mortality in Different Worlds Magazine #31 (1983):

I think that war is the ultimate stupidity, and that the one real drawback to most fantasy role-playing games, and wargames, is that the consequences of combat are never fully understood by the players. To swing a sword or fire an arrow is going to result in blood-letting, pain, and even death-it is all a game to be sure, but the intent of the players is still the same. Thus I have always tried (with my Critical Hit Chart and such) to forcefully bring home to the players that battle and battle results are always ugly and terrible.

Dave also commented in Different Worlds Magazine #2 (1979) that over 700 player characters had perished in his campaign. At first glance that may seem like hyperbole, but make that assumption AFTER you read through the Arduin material!

I first saw the wacky little digest booklets sometime in the mid to late 1980s. One of the older players in our gaming group had them on his book shelf. I remember very distinctly being enamored with them, as the lower production quality had an ancient tome vibe. As a teenage boy artwork like Shardra the Castrator (Google it) was the subject of endless laughing and jokes. It would not be until many years later that I acquired my own set of the trilogy. In terms of gonzo material it remains a wonderful source to mine ideas from.

Just like the Mountain Dew we consumed during all night game sessions, Arduin was the nitrous oxide of early role-playing games. Those of us who enjoy gonzo RPG material owe a big thank you to Dave Hargrave. Furthermore, self-publishers and fans of DIY material should really appreciate Dave’s work. Creating something with an electric typewriter and whiteout is just about as old school as it gets. So later today take out your percentile dice or Zocchihedron and roll a few critical hits for Dave!


For those interested in adding Arduin to their own collection, Emperor’s Choice has all the volumes compiled in a modern product line. If you are a fan of Arduin or interested in more information here is the link to the Google+ group. 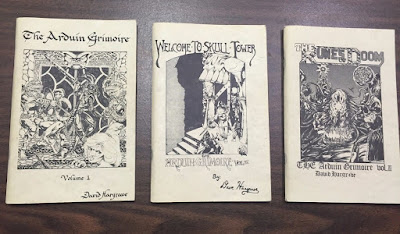 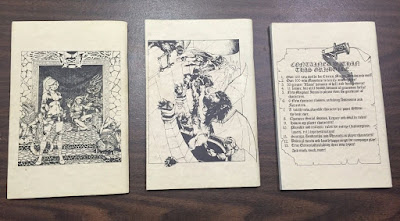 "The ARDUIN TRILOGY contains the most innovative and challenging Adventure Gaming system on the market. The Trilogy is several hundred pages and handsomely illustrated. Each volume is crammed with new spells, monsters, treasures and character types; plus a definitive system of rules to satisfy the most demanding FRP enthusiast. Arduin is an "anything goes" system, whose only limits are the player's imagination!

WARNING!
The Arduin Trilogy is recommended only for those players with some experience in Adventure Gaming and looking for even more challenge and enjoyment. For novice players, we recommend the "Arduin Adventure" to learn the true path to fame, glory and adventure."