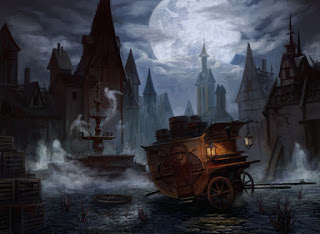 In the reliquary of the Death House adventure the PCs find a collection of unpleasant items. The cult was using these “relics” during their rituals. In the published adventure all the items are worthless and stored in thirteen niches along the walls. I decided that maybe that was true at the time, but the power of the Death House has altered them. The presence of the undead has a unique way of seeping into things. So below please find these "relics" presented as unique magic items of varying power level.

01. A small, mummified, yellow hand with sharp claws (a goblin’s hand) on a loop of rope. Once on each of your turns as a bonus action, you can mentally command the hand to crawl up to 15 feet and interact with an object. The hand can perform simple tasks, such as fetching or grasping things. It has AC 15, 7 HP, and Strength of 8, and it can’t attack.

02. A knife carved from a human bone. Crafted from the thigh bone of a murderous Barovian, this vile tool now works as a compass. As an action, lay the knife on a flat surface and it will point to any undead within 30 feet of you. If there is multiple undead in different locations the knife will simply spin.

03. A dagger with a rat’s skull set into the pommel. This weapon is considered magical but offers no bonus to hit or damage. Once per day the wielder may summon a Rat Swarm into service for one round. While this occurs the rat skull chatters and grinds its teeth constantly.

04. An 8-inch-diameter varnished orb made from a nothic’s eye. As an action target one creature within 15-feet. The target must contest its Charisma (Deception) check against your Wisdom (Insight) check. If you win, the eye allows you to magically learn one fact or secret about the target. The target automatically wins if it is immune to being charmed. There is a 10% cumulative chance per use of this weird insight that the orb crumbles to dust.

05. An aspergillum carved from bone. Any liquid placed inside the aspergillum immediately becomes a shadowy tonic. The living will notice a strange antiseptic smell, while the undead sense sweetness. Any undead within a 20-foot radius will be mildly attracted to liquid sprinkled from the aspergillum. They will casually seek out the euphoric odor so long as they do not see the living or have anything harmful occur.

06. A folded cloak made from stitched ghoul skin. This unholy garment is cold to touch and causes revulsion in those that see it. The wearer of this cloak gains advantage on saving throws against the paralyzing claws of a ghoul. In addition ghouls will regard the wearer with indifference but they must be extremely cautious.

07. A desiccated frog lashed to a stick (could be mistaken for a wand of polymorph). This bizarre wand can be used a spell focus which has a unique ability. Once per day the wielder may command the desiccated frog to animate and a deliver a melee combat spell. The frog can dash 60-feet per round and uses the wielder’s attack rolls. If the frog takes any damage it’s immediately destroyed and reappears the next day on the wand.

08. A bag full of bat guano. This calcified excrement is magically imbued to explode in a cloud of yellow, nauseating gas when thrown. The bag contains 1d4 congealed balls of bat guano which work as the 3rd level conjuration, Stinking Cloud when striking an object.

09. A hag’s severed finger. This shriveled green digit is warm to touch and covered in perpetual slime and algae. Once per day the finger can change the owner’s appearance for up to one hour. They will appear as a bent old woman with sinewy arms and rotted green teeth. Their charisma will also be halved but they will gain the ability to breathe under water normally.

11. An iron pendant adorned with a devil’s face. Inscribed on the back of this strange pendant is the name Acererak. The devil face has a large gaping mouth inside of which swirls a strange black energy. Anyone sticking their finger inside the mouth will immediately be surrounded by nothingness. The pendant is able to cast Darkness when used this way. There is a cumulative 10% chance per use that the pendant crumbles to dust.

12. The shrunken, shriveled head of a Halfling. This morbid fetish has eyes which dart to and fro when the living are nearby. As a bonus action once per day, the owner of the head can command it to sing songs about heroes of old. This causes all allies within an earshot to gain advantage on saving throws against being frightened.

13. A small wooden coffer containing a dire wolf’s withered tongue. This tongue tapers to a thin tip which is curved into a ladle-like form. When picked up a lapping sound can be heard and the tongue will pull the wielder toward anyone who is wounded. If permitted, the tongue will magically lick away wounds involving blood (DM adjudication required). This ability may be used once per day to heal 5d4 + 4 damage. The amount rolled may be split among multiple targets.


If you enjoyed this post please also check the following: