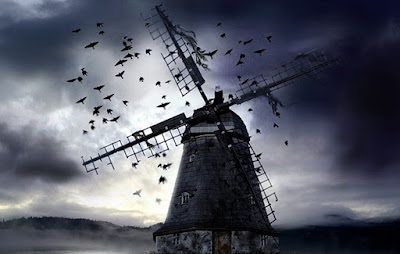 Warning: Curse of Strahd Spoilers Ahead!

This past weekend the players in my Curse of Strahd campaign found their way to the Old Bone Grinder. Once a grain mill, it is now the abode of a coven of vicious hags. The hags are trapped in Barovia but are making the most of it with their baking hobby. The dream pastries they create allow Barovians to enter a near euphoric state of happiness when consumed. Practically addictive, when a family can no longer afford them the hags are willing to trade. The item used for these barter sessions are the Barovians’ children, which just happen to be the key ingredient in the dream pastries. The hags use the windmill's grindstone to pulverize their little bones into powder. For background people with souls are rare in Barovia. This causes the hags to prick children with a needle; if the child howls in pain, that’s a key indication that the child as a soul. 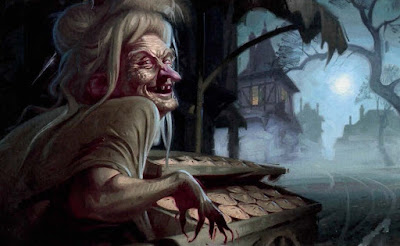 This terrible form of corruption is indeed horrid to contemplate. Adults are basically consuming their own children for a chance to escape the dread land for a short time. When the players piece all this information together they will likely be outraged and want to act. The problem with this approach is a coven of hags is not to be trifled with, especially for lower level characters. Our game session had one character death and nearly ended in a nasty TPK. Two of the hags are believed to be defeated and one is known to have escaped the area. Since my players will most likely be reading this post I will not definitively share what that outcome will be.

Hags and crones have been used for ages in stories to scare children, Hansel and Gretel being a tale most are familiar with. I love the inclusion of Morgantha and her wretched daughters, Bella Sunbane and Offalia Wormwiggle in the Curse of Strahd. In our session my friend Ike’s character had the windmill deed found in the Death House adventure. After ousting the hags from the windmill his arcane trickster attempted to use the deed to claim ownership of the Old Bone Grinder. A few arcana checks and makeshift ritual later, I decided it worked thus preventing the coven from entering the windmill for one year. I’m sure the hags will be perfectly fine with this change and won’t mind it at all!

This got me thinking more about the coven and their macabre baking sessions. Night hags enjoy tormenting dreams and sowing sorrow throughout the land. Surely the dream pastries cannot be the extent of their confectionery skills. Therefore please find below a few new delicacies to add to your own Curse of Strahd campaign.

1. These pastries are filled with a rich sweet cheese which will satisfy the most demanding connoisseur. Unfortunately, the cheese is crafted using the powdered fingernails of a ghoul. A creature that eats one in its entirety must succeed on a DC 16 Constitution saving throw or become paralyzed. The target can repeat the saving throw at the end of each of its turns, ending the effect on itself on a success.

2. This doughy pastry is filled with minced tree-ripened apples and has a tart flavor. Each apple was carefully chewed by a Night Hag and infected by their saliva. A creature that eats one in its entirety must succeed on a DC 16 Constitution saving throw or fall unconscious. It wakes up if it takes any damage or if another creature uses its action to shake the sleeper awake.

3. These flaky and savory puffs are filled with spinach and broccoli. The vegetables are grown using compost created with the rotting flesh of zombies. A creature that eats one in its entirety must succeed on a DC 16 Constitution saving throw or develop Flesh Taut disease. One day after infection, the creature’s flesh starts to become chilled and rigid. The creature takes a −1 penalty to checks that rely on dexterity. At the end of each long rest after the symptoms appear, the penalty worsens by 1. When it reaches −5, the victim has developed acute Rigor mortis and has their movement halved. This can only be cured with magic such as lesser restoration or heal. 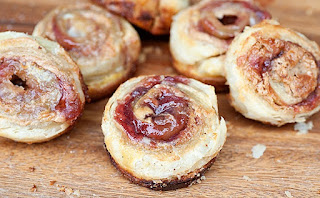 4. These flavorful delights have a deep appetizing red color. Made with a blend of cherries, their tartness is carefully balanced with a sweet glaze. Unbeknownst to everyone the latter is created with the bones of hapless Vistani travelers. A creature that eats one in its entirety must succeed on a DC 16 Wisdom saving throw or believe they are Vistana. They will dress in bright clothes; laugh often, and drink heartily. This behavior will gain the attention of the true Vistani, and the pastry eater gains disadvantage against their Evil Eye for 1d4 months.

5. These pretzel twists are covered in cinnamon sugar and are a favorite of Barovian children. The hags also sprinkle something far more sinister on top. Small diseased rodents are captured, dried out, and powdered. A creature consuming a pretzel twist in its entirety must succeed on a DC 16 Constitution saving throw or it can’t regain hit points except by magical means. Additionally their hit point maximum decreases by 3 (1d6) every 24 hours. If the hit point maximum drops to 0 as a result of this sickness, they die. This can only be cured with magic such as lesser restoration or heal.

6. These meat pies are lovingly cooked with delicious gravy and mouthwatering bits of venison. Semi-sweet sugar is sprinkled on top of the pies to balance the strong meat flavor. Unfortunately, the meat is not all venison, as the hags also include corpse flesh of those they murdered. A creature that eats one in its entirety must succeed on a DC 16 Wisdom saving throw or become frightened for one minute. For the duration they can see the memories of the dead they have consumed. Every round, before the effect ends, the target must succeed on a Wisdom saving throw or take 4d10 psychic damage. On a successful save, this condition ends.
Posted by Grand DM at 1:14 PM