A Fistful of Weird Dice 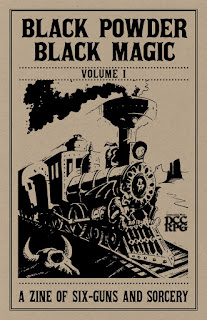 This past weekend my wife and I had the pleasure of attending Legacies Game Day in Havertown, PA. Although most of our day was spent behind our Ultanya Publishing table, we managed to play Black Powder, Black Magic by Stormlord Publishing. Admittedly, even though I own plenty of DCC material this was my first time actually playing it. It was never for lack of interest, but rather time and current RPG commitments. We had a total blast (literally from a TNT explosion in game) playing in a 0-level funnel. We were also finally able to use all our weird dice (D3, D5, D7, D14, D16, and D24).

The genre of the iconic Wild West was the icing on the cake for me. That era of American history is filled with expansion, exploration, heroes, and plenty of villains. Black Powder, Black Magic did not disappoint, and I have enjoyed reading through the first two volumes. I think the mash-up with the DCC rules makes for a fun theme where lethality is constant but so is luck. Suffice to say I have been hooked, which some of you may reply, “It’s about time!”

On the drive home my mind was filled with ideas of stagecoach robbers, rustlers, gamblers, weird shamans, and lawmen. I was imagining desert vistas, ghost towns, abandoned mines, and Conestoga wagon massacre sites. As a former Civil War living historian, this would be a perfect way to combine another passion of mine with RPGs.

A sparsely touched upon area of the American Civil War remains the far western territories of New Mexico and Arizona. The New Mexico Campaign occurred between February and April of 1862. That being said, the 1966 classic The Good, the Bad, and the Ugly features this campaign as foundation material.

I decided to create a quick table of random items for use in your own Black Powder, Black Magic games. This table in particular concerns itself with a haunted bivouac site of the Union Army. It belonged to a company of the 3rd U.S. Cavalry. Plunder lightly, as you may rouse the angry spirits that still camp there. 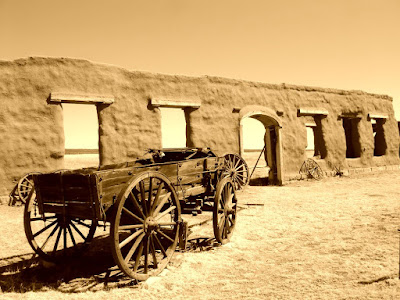