Side Trek: The Winter Garden

While staring out at the falling snow a week ago, this idea started to brew. I have always been fascinated with faeries, which can be used to great effect as a campaign boogeyman. Especially when you consider the colder months are often associated with death. What if in desperation the PCs were forced to seek refuge at the crossroads of the fey? Or maybe one of the characters has experience with these winter gardens and seeks one out. There are many adventure seed doors which can be opened with this side trek. So enjoy…and dress warmly adventurer, otherwise you may need to find a winter garden! 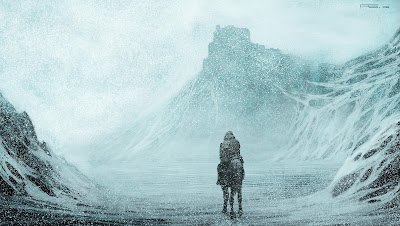 Old rangers tell stories of their existence, and secluded druid circles whisper about them. A winter garden is a location where the boundaries of the prime material plane thin. They are a crossroad into the world of the fey that may bring solace or doom. Winter gardens usually occur do to some magical phenomenon or the vile intent of their creator. They are typically an oasis compared to the harsh conditions around them. These small pockets of the fey world normally do not last longer than half a day.

A winter garden is normally idyllic in appearance and may even have certain ethereal qualities to it. Depending on the type of faeries that care for the garden, this may all be an elaborate illusion. As most learned sages would explain, this is the inherent danger of seeking refuge in a winter garden. However, travelers suffering from hyperthermia, or trying to escape some predator are often willing to take that risk.

Rangers and mountaineers often use frozen bodies as landmarks when navigating. That said, new bodies found which appear shriveled and withered are avoided. These unfortunate souls are believed to have fallen victim to a dark winter garden. This visual omen has caused entire villages to pack up and move a great distance away. For these reasons, if planning an expedition to the cold north it’s often wise to hire a skilled guide.

1. This winter garden is comfortable and enchantingly beautiful. Not only is it picturesque, but also functions as a Ring of Warmth for up to eight medium sized creatures. Those inside can see out of the pocket as if peering through a frosted window. No creatures of evil alignment may enter this winter garden as it’s maintained by good faeries. But the fey are fickle, and use of their garden does come at a price. If not offered some sort of magical restitution, the faeries will attempt to use a Geas spell to gain one.

2. This winter garden is more of lair and contains a large ice cave. Those passing through into this fey pocket will notice tufts of white hair, crumbled bones, and ursine odor will assault their senses. A very used fire pit also completes the area, which includes stacks of chopped wood. A low rumble can be heard from within the ice cave and the temperature here is just hospitable. The inhabitant of the cave is a terrifying fey which appears as a massive polar bear. Good role-playing or high Charisma based rolls should be made to share this garden. Otherwise the PCs will be asked to leave…once! 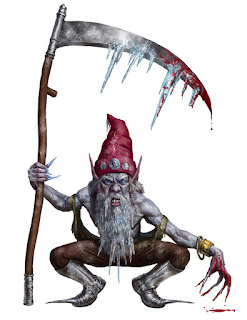 3. This winter garden is a crumbled ruin, its remnants covered in slick ice. Dead trees with twisted limbs reach for the sky in poses of sadness. Everywhere the snowy ground is punched with hundreds of small footprints and the red stains of blood. The area is oddly steamy, so much that the temperature immediately warms anyone passing into the garden. This is how the Redcaps who maintain this garden like their victims, thawed and easily drained of blood. Anyone fleeing the garden will be pursued for up to a mile by the Redcaps if they are lucky enough to escape.

Note: If playing 5E D&D, statistics for Redcaps are available in Volo’s Guide to Monsters. If you prefer a more system agnostic or OSR approach, Redcaps are detailed in Tales from the Game Tavern issue #3.

4. Perhaps the most coveted of all, this winter garden can show imprints of the past. It usually manifests as an open clearing with a ring of low stones. Within the pocket the harsh conditions of the winter are repelled completely, and it exists as a nice Autumn day. The faeries who maintain the garden will exchange one vision of the past for one sacrifice by the PCs. The latter may include a coveted possession, a lock of hair, or a favor they will owe the fey. The vision can be from anywhere in the surrounding area (2x2 mile radius) within the last 100 years. The visions never last more than one round as the fey voraciously seek new sacrifices.
Posted by Grand DM at 11:31 AM