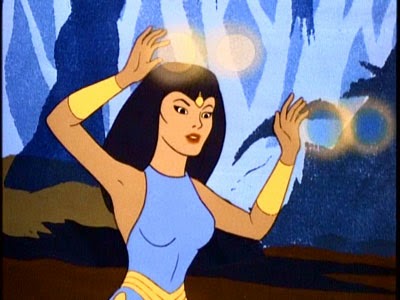 For Throwback Thursday I thought it would be fun to remember Princess Ariel (voiced by Nellie Bellflower) from Thundaar the Barbarian. If you came here looking for a red headed mermaid I’m sorry to disappoint you. For those who don’t recall the cartoon it was way ahead of its time in terms of gonzo sci-fi mixed with fantasy.

The beginning narration is as follows:

The year, 1994. From out of space, comes a runaway planet, hurtling between the Earth and the moon, unleashing cosmic destruction. Man's civilization is cast in ruin. Two thousand years later, Earth is reborn. A strange new world rises from the old. A world of savagery, super-science, and sorcery. But one man bursts his bonds to fight for justice. With his companions, Ookla the Mok and Princess Ariel, he pits his strength, his courage, and his fabulous Sunsword, against the forces of evil. He is Thundarr, the Barbarian!

I picked Ariel for the throwback because I think she really was the unsung heroine time and time again. She first appeared in the episode Secret of the Black Pearl which aired October 4th, 1980. Ariel…black pearl notice all these references which pre-date Disney™? Being a sorcerous Ariel was incredibly valuable as an adventuring companion in the post-apocalyptic world of 3994.

Ariel’s powerful innate magic almost always utilized the somatic component of hand gestures. She was able to shape force magic specifically in the form of offensive bolts and protective shields. Many times Ariel was seen manipulating matter in ways similar to prestidigitation or even thaumaturgy. Perhaps coolest of all, was Ariel’s ability to counter the magic of enemy casters. It would save her companions time and time again.

While Thundaar and Ookla were great warriors, they were also not the brightest bulbs. Ariel seemed to be a wellspring of knowledge pertaining to science and early human history. Apparently her father, Sabien, was responsible for her advanced education in both mundane and magical subjects. That being said, he was a vile and cruel man who kept slaves with one of them being Thundaar. Princess Ariel was responsible for freeing Thundaar and Ookla and thus became their companion in exile.

Ariel was depicted as a fit woman with dark skin, hair and eyes. She wore a form fitting blue tunic with golden belt, bracers and boots. A teardrop tiara completed her outfit which was barely visible under her raven colored hair. It was alluded to in the show that she had deep feelings and respect for Thundaar but he was too thick headed to realize it. Stupid barbarians...