The 1980s were a great era for not only role playing games but also fantasy cinema. I recall very fondly how those movies influenced many table top adventures and also characters. One thing that really stands out about many of those movies was the unique weapons used by many of the protagonists. Just think of the first time you saw a light saber as a kid and the associated wow factor. Below I have listed eight such weapons that I believe any old school enthusiast should mold into their world. Perhaps you already once did back in the 1980s and it’s time for some modern day nostalgia!

This is a movie that I still love to this day because of the assembled party of adventurers. One such
hero was a grizzled fighter named Ranulf (Morgan Sheppard) who used a cartridge fed crossbow. The first time I saw this weapon in action I immediately had to put it into my campaign. A semi-automatic bolt spewing crossbow? Sign me up and Darryl from the Walking Dead keep on drooling! 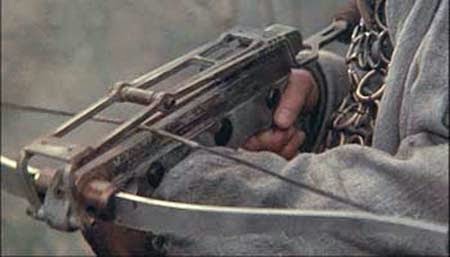 Tri-Bladed Sword, Sword and the Sorcerer, 1982

Conceptually it’s hard to imagine wielding a triple bladed melee weapon. Ok, set logic aside and remember this is the stuff of fantasy and magic! In the movie Prince Talon (Lee Horsley) is able to fire the blades with incredible force at his opponents. So an anime style melee weapon that doubles as a blade shooting cannon? This HAS to be found and wielded by some lucky player character! 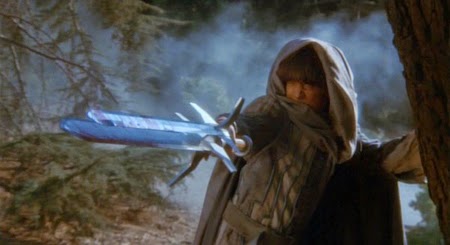 Dar (Marc Singer) is a barbarian with a really cool boomerang that has four axe blades. With the axe blade theme I can completely envision this being a dwarven exotic weapon. Especially when used in the narrow halls of the under realm and thrown across chasms. No dwarf would throw a perfectly good axe unless it returned to their hand! A weapon like the caber really allows a character to have that trusty ranged attack available when needed. 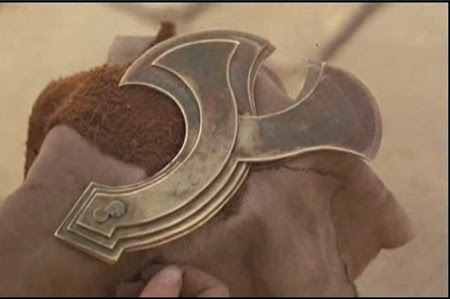 When Prince Colwyn (Kenneth Marshall) pulled the glaive from the lava pool it was a cinema moment I will never forget.  An ancient magical throwing weapon with retractable blades that returns to your hand! To a ten year old fascinated with shurikens this was like one on steroids. The glaive defiantly has an artifact aura about it and could serve well as one in any campaign. 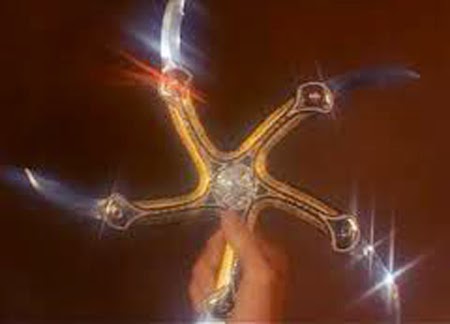 Being a big fan of gonzo and magitech in my own games I had to include this after a friend’s suggestion. The Weirding Module translates specific sounds into sonic attacks of varying potency. Imagine a well versed bard character finding one of these Purple Haze inducing devices? I love the idea of a magic item that amplifies and modifies one effect into another. Paul Atreides (Kyle MacLachlan) shatters a stone obelisk with his during a training exercise in the movie! 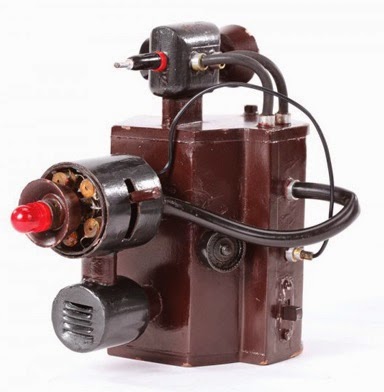 Navarre’s (Rutger Hauer) double crossbow is a great example of something so cool and yet not very outlandish. The over and under design with a double shot mechanism would not be hard to make in a fantasy world. I would imagine it would command a great price but most adventurers should be able to save for one. This was another weapon that immediately found its way into countless D&D campaigns back in the 80s. I highly recommend you consider it now and breathe some life back into crossbows!

There is nothing more basic than a huge bone club and Falkon (Paul Smith) wielded his with great prowess. I really think this club deserves mentioning because it reminds us that the coolest weapons don’t have to be traditional. Maybe it’s the leg bone of some ancient mythical beast, virtually unbreakable and oddly heavy. I could see a party of adventures being on the receiving end something similar and then one of them using it afterward for many levels. 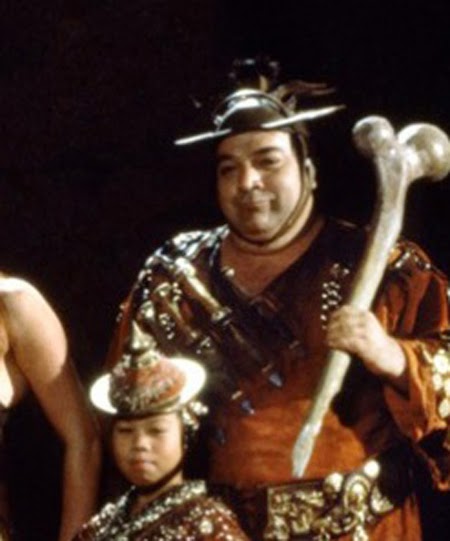 I will be honest in 1988 I only noticed the fiery Sorsha (Joanne Whalley) first and her wicked sword later. That being said, the serrated sword is such a nasty looking weapon. It hurts going in and like an arrow I could only imagine the damage this does on the way out. It also could double as a pseudo saw for an adventurer on some nasty dungeon delve. This is a great example of a normal weapon with a unique twist beyond just a simple (and often boring) +1. 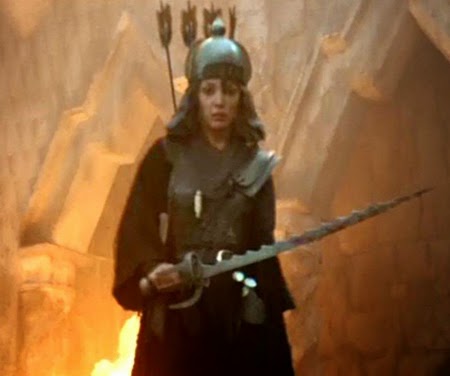