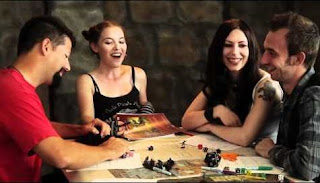 I loathe stereotypes of any kind. This holds especially true if they relate to anyone’s hobby. RPGs have been battered and beaten over the years by all sorts of stereotypes. Titles such as  geek, basement dweller, nerd, and other unsavory and unfair handles. I have always argued against this sort of behavior especially when it pertains to my favorite past time.

June 2013 will mark the 30th anniversary of my campaign world Ultanya. That is an accomplishment that still has not really hit me yet. This is a world that 37 real people have adventured in and shared their imagination with over the years. Military veterans, IT professionals, bartenders, college professors, medical professionals, mechanics, construction professionals, etc.

When I take a step back and look at the vast array of amazing people that have gathered around my gaming table it’s truly awesome. There is no “box” that they fit in as everyone of them is a unique person. Quite honestly I think anyone would be hard pressed to even guess any of us were such stalwart RPG junkies. Even to this day the ignorant of the world seem shocked when they learn that I not only play D&D but proudly Dungeon Master it.

Social Media has done wonders for the RPG world in demystifying the stereotypes. That said TV media still takes cheap shots at the hobby. I was excited to see the cast members of the Big Bang Theory playing D&D until they suggested that girls do not. I’m not sure about other groups but ours currently has two very active female players. My very first experiences in gaming were with my cousin since she had all the basic sets already. I find it absurd that female gamer stereotypes (in popular media) suggest they are only there because they were somehow forced to be. I hate to break it to the naysayers but girls have great imaginations and play games too.

Sure the RPG and War Game tables have been primarily male dominated over the years. And yes there is beer drinking, random poop jokes and other occasional crude behavior. But again the modern female is not June Cleaver and can hang with the boy’s just fine. In fact I prefer the diversity at the gaming table and the varied perspectives on story and imagination.

Stereotypes are everywhere and unfortunately still plague the RPG world. Sure there are socially awkward people who play RPGs just as there are socially popular people who play. To cast a wide net on any hobby based on inaccurate observations is doing everyone a disservice. My favorite thing to do when I meet someone being snarky about D&D is to invite them to a game. What’s the old adage, “don’t knock it until you try it?” And hey you never know…you may just like it!
Posted by Grand DM at 11:41 AM