My neighbor runs an animal shelter and always has all sorts of amazing little critters around. Today she walked over to show our kids a baby raccoon which was found abandoned. It was only two weeks old and still had not opened its eyes yet. Perhaps the most amazing thing was how harmless and cute the little guy was. The kids were fascinated with it and wanted to hold it (did not happen because daddy cannot cast remove disease) and help it in any way they could.

Almost immediately the idea of animal companions popped into mind. Over the years there have been plenty of rangers and druids around the table. Add to those wizards with a plethora of summoned familiars.  The one thing they have always had in common is the companion or familiar became nothing more than an add on. Even in most online games they are very helpful in the early stages and then become something that just follows you around. My wife’s creature handler in Star Wars Galaxies may disagree but even the Rancor pet stunk.

This blog entry however is less about game mechanics and more about flavor. Making our furry or scaly friend more fearsome is really the purview of the GM. It remains very campaign and game system dependent because of balance issues. The last thing any new adventuring party needs is an animal companion which tanks better than the party fighter.

So what would happen if for example the party found a baby owlbear and raised it? This being completely independent of any class ability. What if this owlbear became an NPC which was similar to the party dog? I really like the idea of the group having a joint animal companion which grows with them. It creates a familiar bond and mechanically all the players could take turns controlling it. And in the event of a disabled PC there is still something for that player do in the short term. 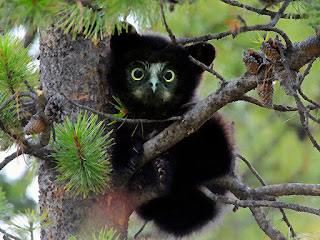 But perhaps most important of all its something the players and their PC’s have accomplished together. They have raised this ferocious beast which is outlawed and normally hunted and now call it friend. The role playing opportunities are abound and there is plenty of adventuring hooks. Imagine if their owlbear became lost, captured or ill and needed a special poultice created to heal its wound. Maybe the Owlbear comes of age and heads out to start its own family. Now the PC’s have a whole litter of cubs and even bigger problems!

I think a party animal companion solves the problem of the beastie being completely over shadowed by the PCs. With a full party of players interacting, looking out for or even running it as an NPC it will come alive. Old Yeller the Owlbear may make it all the way to Epic level in the right campaign. So next time you are looking for something new for your players to loot add a fantastical baby creature. It could generate endless adventures or hairballs depending on your mood!
Posted by Grand DM at 11:21 PM