One of my favorite aspects of 4E is the minion. Heroic and cinematic combat is always something I have tried to capture in my campaigns over the years. One thing that has always been a problem regardless of edition is the slowness of combat. Add in a table full of players at mid to high level and paint may dry faster than your average combat round. 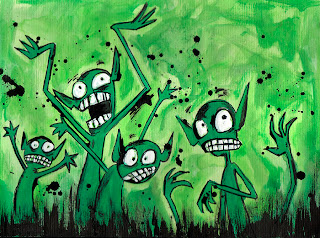 It was minions in fact that actually got me to FINALLY try 4E after avoiding it for so long. Sure the game mechanic is easily transferable but using it with the edition it was born from made the most sense. Now a year later I can honestly say I LOVE minions. I have read plenty of bloggers who complain minions add too much of a Meta game element once players realize what they are dealing with. I tend to disagree because after all our stalwart heroes should be able to identify threat levels. Especially after a few rounds of combat when they have had time to size up the situation.

In using hordes of minions I realized I wanted to beef them up a tad as the players leveled. I reconnoitered various gaming forums and saw different DMs were using their own form of a two hit minions. I loved the concept and decided to implement the idea in my own home brew. These minions have valuable experience which sets them apart from their lesser colleagues. This mechanic has been great in my mid to high level games. It has effectively created good opponents which do not have both a super high AC and sponge of hit points.

Instead these minions have characteristics which make them deadly – but manageable by our heroes. And most importantly they make the clock manageable which in my mind is the most important thing. Our group plays on Saturday nights with only 4-6 hours to spare – being bogged down in mind numbing combat is not a road I want to go down.

So below I present to you an easy mechanic for both 2 and 3 hit minions:

These rules are simple and effective. I included the damage/critical clause because my initial multi-hit minions were a huge nerf to strikers. This way damage is still rolled and a big hit just gets the job done. I also have allowed Daily powers to instantly kill minions of any type on a DM discretionary basis. If it helps move combat along and make for an epic encounter then I am all for it.

The moral of the story is use minions liberally and make your combat much more fun!
Posted by Grand DM at 2:51 PM