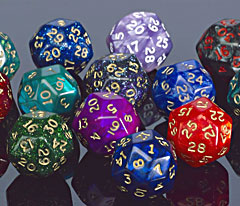 When I first started playing D&D years ago dice collecting was something I did avidly. Any chance I had to walk to the hobby store in Philadelphia and spend a couple bucks I was adding to my collection. In fact among my pre-teen gamer circle your dice were a huge status symbol. I liken it to marble collecting in the early 1900s. One such die I collected many of is the much maligned D30. Still to this day they sit in a huge wayward container of dice I never use. They have rested like an ancient treasure waiting to be unearthed by none other than my 5 year old son.

I just started building small dungeon maps and teaching my young children a very watered down version of the game. We roll dice, compare numbers and decide who takes damage. Well the dice fascination immediately has caught on with my kids and so has their curiosity about the D30. So as I was sitting on the train on the way to work this morning I had one of those light bulb moments. I needed to find a way to incorporate the D30 into my current campaign and get players excited about dice again. 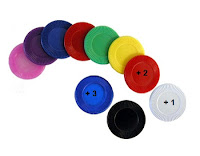 Already in my campaign I have a reward system that involves bonus pluses. Basically I took some cheap poker chips and wrote +1, +2 and +3 on them with a sharpie. I give them away for a plethora of reasons – mostly for good role playing and epic session moments. They are a small reward that can stack to allow a player to avoid the fickle fate of the D20 once in a while. That said I realized I needed something even cooler than the +3 which up until now has been the gold standard for awarding session badassery. Enter the D30! So below is my sample accolade award chart. Feel free to modify for you own campaigns – mileage will vary. 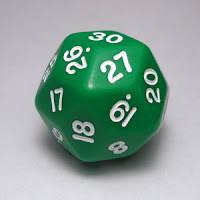 This is just an example of potential things a player could do to earn a chip. Up until now I never even had a chart and have just shot from the hip – which is my preference when giving these awards. The chips can stack to create a greater bonus and act as an immediate interrupt only for the player cashing them in. So where does the D30 come into all of this you ask? Well as an addendum to the accolade awards players will now be able to cash in chips totaling +3 in value for a D30. Or if the DM is feeling generous he or she may just award a player with a D30 roll.

The D30 is permitted to be used whenever a D20 could be rolled during a game session, e.g. for an attack roll, skill roll, etc. A natural 20 or 30 are considered a critical hit. A player may only use a D30 once per game session regardless of how many they may have purchased with accolade chips.

Seems a little beefy? That’s OK the players are supposed to be heroes! And honestly anything which speeds up combat is always a good thing. And remember there is nothing stopping all you DMs out there from giving the BBEG a D30 along with their action points. Players beware… Oh and get a D30!
Posted by Grand DM at 3:26 PM