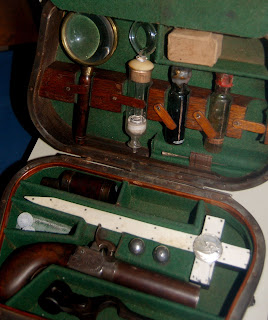 This box contains the items considered necessary, for the protection of persons who travel into certain little known countries of Eastern Europe, where the populace are plagued with a particular manifestation of evil known as Vampires. Professor Ernst Blomberg respectfully requests that the purchaser of this kit, carefully studies his book in order, should evil manifestations become apparent, he is equipped to deal with them efficiently. Professor Blomberg wishes to announce his grateful thanks to that well known gunmaker of Liege, Nicholas Plomdeur whose help in the compiling of the special items, the silver bullets &c., has been most efficient.

My family and I are members of the Mercer Museum in Doylestown, Pennsylvania. With the Curse of Strahd being released, I thought this would be a good time to discuss my favorite exhibit, the Vampire Killing Kit. These were very popular items purchased as late as the 19th century by superstitious visitors to Europe. Unfortunately, as cool as it may be, the Mercer kit is a fake. So why still display it? According to this article at vamped.org, the Mercer decided to display the kit full time because its curiosity value mesmerizes. This video, posted on the Travel Channel, shows just how they determined the kit was indeed not authentic.

That being said, this is still wonderful inspiration material for a Ravenloft campaign. Professor Blomberg could easily become an NPC that exists in the Domain of Dread. Perhaps Blomberg is just a charlatan, selling fake kits to those desperate to combat the likes of Strahd? In the very least I could see imitators hawking fake kits just like gothic snake oil salesman. Imagine the dread some hapless player character would feel when their kit does absolutely nothing to help them!

For purposes of this post, I will be using the Mercer exhibit as foundation material for a working Ravenloft kit.  As you can see from the pictures, one of the most curious items included are the silver bullets. My immediate reaction as a long time gamer, was to scratch my head since silver is for lycanthropes, right? Well there is apparently some argument against that theory.

Silver bullets as a tool against vampires were first published in 1928. The Vampire, His Kith and Kin by Montague Summers has the following entry: In some Slavonic countries it is thought that a Vampire, if prowling out of his tomb at night may be shot and killed with a silver bullet that has been blessed by a priest. But care must be taken that his body is not laid in the rays of the moon, especially if the moon be at her full, for in this case he will revive with redoubled vigor and malevolence.

Lycanthropes, namely werewolves, may find their alleged vulnerability to silver from the Beast of Gévaudan tale. In 1767 Jean Chastel is recorded as slaying the beast with a blessed silver bullet. Many argue that Chastel's use of a silver bullet is nothing more than a later embellishment on the story. Whatever the facts may be, this does not diminish the possibility of silver being useful against vampires. In terms of the kit I will be presenting in this post, the silver bullets will absolutely be effective. Below please find the kit presented for use with the 5th edition Curse of Strahd materials.

Vampire Killing Kit
This ornate, walnut box is hinged and latched in iron. Inside are the tools necessary to combat the race known as "vampyr." 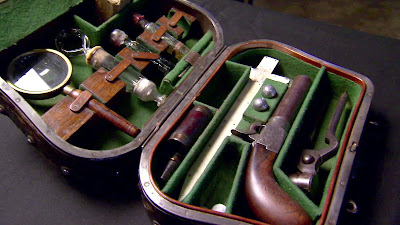