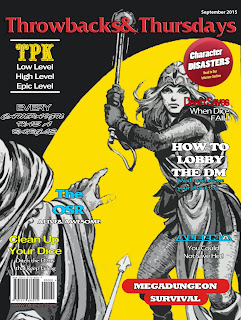 Aleena was the first character death witnessed as I learned how to play the game with the Red Box. A now infamous wizard named Bargle fells her with a well-placed magic missile. That unforgettable moment was part of the solo adventure and went as follows:

Aleena can’t find Bargle, and is starting to look worried. Suddenly, the sound of a spell comes from a far corner of the room! The cleric turns and runs in that direction, waving her mace and shouting. The black-robed magic-user appears in the same corner as the spell noise, with a glowing arrow floating in the air beside him. He points at Aleena; the arrow shoots out, and hits her! She wails and falls with a sigh, collapsing in the middle of the room. The glowing arrow disappears.

As a young player in 1983 this actually made quite an impression on me. After frantically trying to see if there was another potential outcome I realized it was cast in stone. As a fledgling dungeon master it was almost like a moment of clarity with how to proceed in the years ahead. Although I could never be accused of being a killer DM, there have been plenty of character deaths in my sessions over the years. In fact in my current campaign we have seen the demise of two characters over the past year.

British author Sir Arthur Quiller-Couch in 1916 is quoted with saying “Murder your darlings” which since become “kill your darlings” in another quote by William Faulkner. What does this mean? My interpretation is that everything in a story or campaign is indeed disposable. It does not matter if it’s a favorite NPC, PC, place or thing. Since in a role playing game our darlings are often tied to dice rolls everyone needs to be objective when a change occurs.

Anyone who is a fan of George R.R. Martin is very familiar with this concept of killing off your darlings. That being said, a role playing game at its very essence is about the characters. A character death you always hope will have meaning if you are involved in a serious campaign. But as the old adage goes as one door closes often another opens. A perfect example is my wife’s favorite character, a pirate named Anjelica the Red. She would have never been created if not for her prior character meeting an untimely demise at the hands (or tentacles) of a mind flayer. 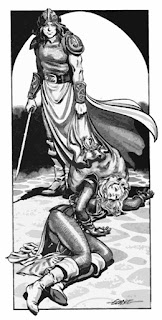 Being an avid blog reader I’m often surprised to see suggestions on how to basically DM with kid gloves on. Character death needs to be something that can occur in any campaign or the credibility of danger is gone. Role playing games at the very essence are essentially cooperative story telling exercises. If the protagonists know they are invincible that makes for a very boring story in my opinion. I think the idea of character death as a minor inconvenience can be attributed to video gaming. Younger players especially are so used to resurrecting over and over that character death becomes a joke.

As a dungeon master if you are afraid to let a player character die you are doing it wrong. I’m sure my last statement may draw the ire of some gamers but I stand by it. Surely it should never be the goal of the DM to intentionally kill a player character. Again cooperative story telling does not include a “versus” anywhere in its make-up. I know how hard it is to get everyone together for a game night and I honestly dislike when a favorite character dies. But in the end it usually helps to move the story forward in ways none of us were even aware of at the time.

What are your feelings on player character death?