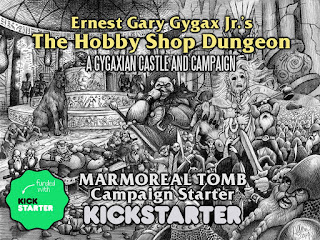 Whenever I’m afforded the chance I like to point other tabletop gamers to Kickstarters that I have personally backed. Ernest Gary Gygax Jr.'s Marmoreal Tomb Campaign Starter is one such project. Already funded the Kickstarter is now working on stretch goals. For the uninitiated Ernest is the oldest son of the late Gary Gygax who is one of the creators of my favorite game Dungeons & Dragons.

We were first afforded a preview of the material back when Gygax Magazine issue #3 was released. Even then I found myself taking a walk down memory lane looking at the writing style and accompanying artwork. While some people are not fans of the famous Gygaxian prose I’m hoping that style is a continued theme of the Marmoreal Tomb Campaign Starter. For me it’s just a nostalgia thing since as a young DM I poured over texts filled with it.

So what is this campaign starter all about? Well for background it all started in 1978 when Ernest was working as a clerk in the original Dungeon Hobby shop. What followed was a huge mega dungeon themed sandbox that challenged players in the store. The Marmoreal Tomb will be using material from this vintage home brewed setting.

If you are a student of RPG history this is a really cool product to eventually own. Helping Ernest on the project is his partner Benoist Poire who admittedly is one of my favorite mappers. There is just a wonderful organic feel to his creations and they are just part and parcel to this project.

So what does Marmoreal mean? Well it’s a great old word meaning “marble-like”. Interestingly in our own world grave headstones were once crafted from marble. The problem with marble however was erosion and soon names and etchings became undecipherable. So the Marmoreal Tomb is clever name and who knows what runes once existed that are no longer legible.

The adventure is being designed to capture the feel of the material that many of us grew up with. Although presented to be played with 1E compatible rules, 5E and Pathfinder conversions will be available with stretch goals. That being said, although I’m thrilled about the former it would not have been a roadblock for me in backing this project. As always I'm personally looking for environment and never concerned with the rules.

Many of the old time gamers are advancing in age and the chance to own a new project created by one of them is a real treat. The Gygax family has contributed so much to our hobby from Gary’s original work, to Gygax magazine, Garycon and now this really cool project. So take a walk down memory lane with the new old school and check out Ernest Gary Gygax Jr.'s Marmoreal Tomb Campaign Starter!