I’m not sure how I did not hear about this Kickstarter until this morning but I wanted to shed some light on it. The Dwarves of Demrel spins a tale about the trials and tribulations of three trapped dwarven miners. Apparently there is also a human trapped with them who may have been the overseer of the project. According to the creators Zachary W. Amundson and Christopher Raney the film will explore relationships, test resolve and even touch on racial misunderstandings.

I think this is a fascinating concept since by the admission of the creators we will get to spend more time with the characters. That is one of the great things about role playing games and it may just be captured on the screen here. When we gather around the table to game the characters are the focal point instead of the world they live in. That being said, part of the reason for the Kickstarter is to help make the film more of a visual feast. Just looking at the characters alone with all their gear and grit gives you a good feeling for the potential vibe of the film.

The four characters are as follows:

BRENN - Large, muscular, tattooed, and rugged, Brenn has been a miner all of his life and a pretty good one at that. Think of him as your veteran factory worker. Relying on alcohol/tobacco to deal with life's problems, he constantly sees himself as a "victim" to the fantastical "man", and because of which, cannot take responsibility for a myriad of terrible life decisions. All of which aide to his antagonistic nature and caustic views towards most things... 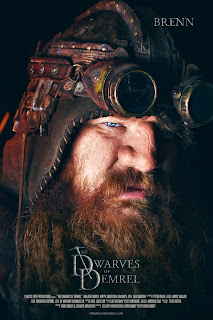 CALCAS - If there was a black sheep within the mining company, Calcas is it. As an ex-accountant with a questionable past and questionable loyalties; he is an enigmatic, cryptic figure. The pragmatic dwarf's intelligence and demeanor alienate him from the other dwarves initially. It isn't until the confinements of the mine and the stress of their force interaction. Calcas is the smallest of the three and the most aware... 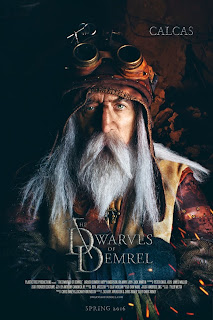 ODRYD - Married early with five kids, Odryd is a "family dwarf" by default. Although he floats from job to job (with mining being his latest) he is not as rough or as seasoned as one may think. He is impressionable and naive. However, Odyd is also probably the most charming due to his natural optimism... 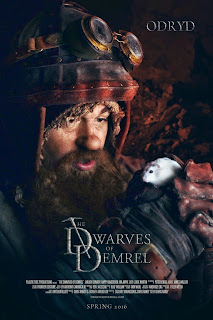 DRUSSO - A byproduct of nepotism, Drusso is a human from the "Capital" -- the largest metropolis in Rye. She came into a position of power when her uncle bought the mining company. As a result, many of the native, dwarven miners greatly resent her (Brenn especially). The progressive Capital is a threat to both the dwarves' more primitive culture, as well as their main economic industry. For example, humans have been unable breath underground until their most recent oxygen purifying gas mask (Drusso's head gear)... 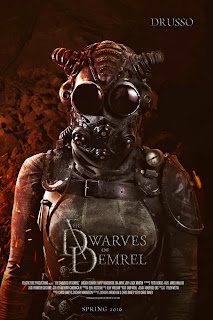 Any fantasy fan should appreciate this project as the sort of inventive and refreshing material that Kickstarter is made for. I encourage you to back this Kickstarter by word of mouth or financially if it interests you at that level. Dwarves, steampunk and a fresh take on a fantasy film? I'm not sure how much more awesome you can fit in there...well there may be a monster also. By Moradin’s beard let’s help the Dwarves of Demrel escape those accursed mines!

Note: The Grand DM and ultanya.com are not affiliated with The Dwarves of Demrel project in any fashion. I just call out cool when I see it. Now roll for initiative and go play some RPGs!
Posted by Grand DM at 11:35 AM