The idiom “I wouldn't touch it with a ten-foot pole” is something we all have heard countless times. There are many anecdotal suggestions of where the popular phrase originated. The earliest reference I could find was recorded inside an 1843 U.S. Masonic community magazine, edited by James L Ridgely:

But that mushroom aristocracy of our country... who would not condescend to touch a poor man with a ten foot pole, were their extraction traced, in nine cases out of ten they were nurtured in the squalid huts of poverty.

I have to believe the popular idiom influenced Gygax & Arneson when they developed the equipment list for Men & Magic. One of the most poked fun of mundane items from old school D&D is the 10’ pole. I can recall as a young player wondering how I would get one down into a dungeon let alone negotiate those nasty 90 degree turns. But playing D&D as a kid was not an endless exercise in logic and trying to make sense of everything. Very often something as outlandish as a 10’ pole would just vanish when not being used but was always there when needed again.

Old school D&D was also much more narrative and descriptive as players used creativity to get around traps and obstacles. Something such as a wooden pole was a useful tool for springing a trap, testing for an illusion or pushing open doors. Then as the gaming community aged so did the way we played. Shifts in design philosophy with later editions of D&D minimized player ingenuity by determining success and failure with a simple roll of the d20. Sure I could get up and change the channels manually but why bother when I have this handy remote control? 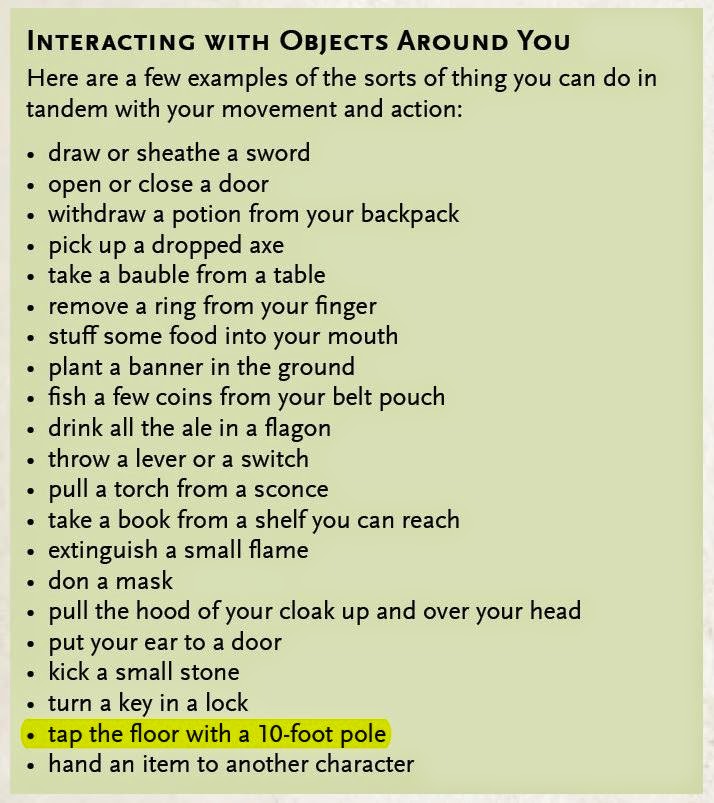 One of the things I was thrilled to see with the release of the 5E D&D Basic set was the return of the 10’ pole on the equipment list. And even though there is still mechanics in place for searching and ultimately disarming traps the 10’ pole can still be useful. As part of movement or action in 5E you can do one minor thing to interact with your environment for free. One of the suggestions on the example list is tap the floor with a 10’ pole.

This is an important take away for any players reading this. Not only does this example harken back to the days of yore but you are being encouraged to think outside the box. Don’t be a slave to the d20 and live with the results. What if the trap before you on the tiled floor is sprung with a minor amount of pressure and your roll did not reveal it? Tapping the floor as part of your movement or action is almost like having a second bite at the apple. But really the former is the first thing you should have done before reaching for that d20!

I believe the 10’ pole really is just a metaphor of early Dungeons & Dragons when descriptive play was the thing. Visualize your environment, ask questions and make good use of mundane tools to help you explore it. In my 5E games I have blended back in much of that old school philosophy or as I prefer to call it O5R. The 10’ pole does not need to be something buried in the tomes of dungeon crawl nostalgia. Rather it is an invitation for you to be a better player, a better DM and ultimately a more imaginative gamer.
Posted by Grand DM at 11:57 AM