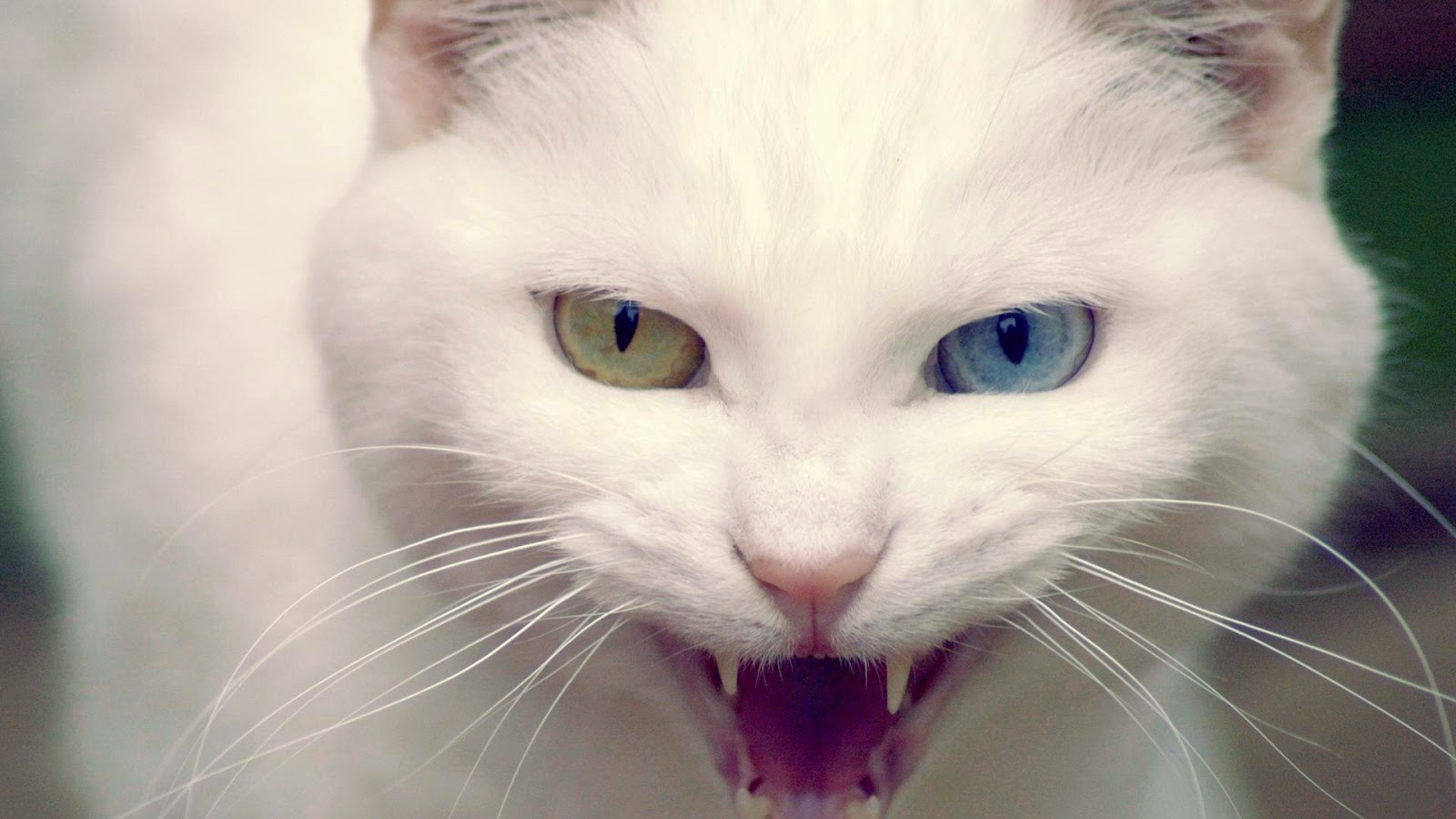 Holiday monsters continue to be something that fascinates me since they make such wonderful gaming material. The Yule Cat is one such creature that finds its origins in 19th century Iceland. Yule is an interesting word with etymology in the Old Norse jol (plural). It was used to describe the midwinter festival well before its modern use being associated with the Christmas holiday. With that background in mind it explains why the Yule Cat (Icelandic: Jólakötturinn or Jólaköttur) only comes to visit us once a year.

According to legend the Yule Cat will eat anyone who was not gifted new clothing to wear during the holidays. Uncorroborated history suggests that the Yule Cat was dreamed up to motivate workers to spin wool garments faster for the winter. If they completed all their work they would reap the benefit of receiving new clothing for Yule. Still to this day, some people feel it very important to secure new clothing during the holidays to avoid the malicious beast known as the Yule Cat. Perhaps if I knew this legend as a child all those ugly velour sweaters and corduroy pants I received would have been more important!

Jóhannes úr Kötlum (1899–1972), an Icelandic writer created a poem about the Yule Cat which gives us some additional insight into the creature.

So the question remains how can we add the Yule Cat to our holiday tabletop adventures? Below I have outlined a random table for potential hooks any DM could use.

Yule Cat Adventures (d8)
1.    The PC’s answer a posted reward for locating a missing caravan supply of winter clothing by a panicked village.
2.    A local druid suspects there is an evil fey creature lurking in the woods during Yule and asks for help in locating it.
3.    A strange feline howling can be heard following the PC’s on a snowy road. They are being watched.
4.    Lazy workers are banned from a village and found by the PC’s in a snow drift. They explain they need new clothing before they can return home.
5.    Claw marks are found on the door in the morning of whatever establishment the PC’s are staying in. The locals beg them to purchase new clothes for fear of the snow demon’s wrath.
6.    Frightened peasant children approach the PC’s and plea for new clothing. They appear famished and emaciated but want clothing over food.
7.    The PC’s see the visage of cat peeking in the window of an inn they frequent. The staff fearfully draws the shutters and locks the door.
8.    The PC’s feel as though they are being stalked by something which keeps getting closer as the midwinter festival approaches.

If you don’t have time to develop your own adventure I have created a system agnostic quick one shot below. The village, its NPCs and various parts of the dungeon have been intentionally not fleshed out.

Season of the Witch

Background
With Yule quickly approaching a local witch has kidnapped the village tailor in her lair. If her plans work correctly the winter orders for clothing will not be completed and the Yule cat will make an appearance to feast. Once the village has been purged of guards and officials the witch will be able to subjugate whoever remains very easily.

Hook
The PC’s are contacted by a relative or acquaintance who knows they are adventurers. They explain a witch of some power is suspected to have abducted the village tailor. They are fearful that a winter demon will target them if the season’s clothing order is not completed.

Environment
The domain of the witch is an ice cavern which exists under an old stone bridge. It can be found by a good tracker because of small clothing stitches found on the wind swept snow. It is roughly a thirty minute trek from the village on foot through the snow drifts. The interior of the lair is not lighted unless noted and consists of stone covered in thick sheets of faceted ice. The temperature is extremely cold and all attempts to melt the ice will fail as some ancient eldritch enchantment prevents it. 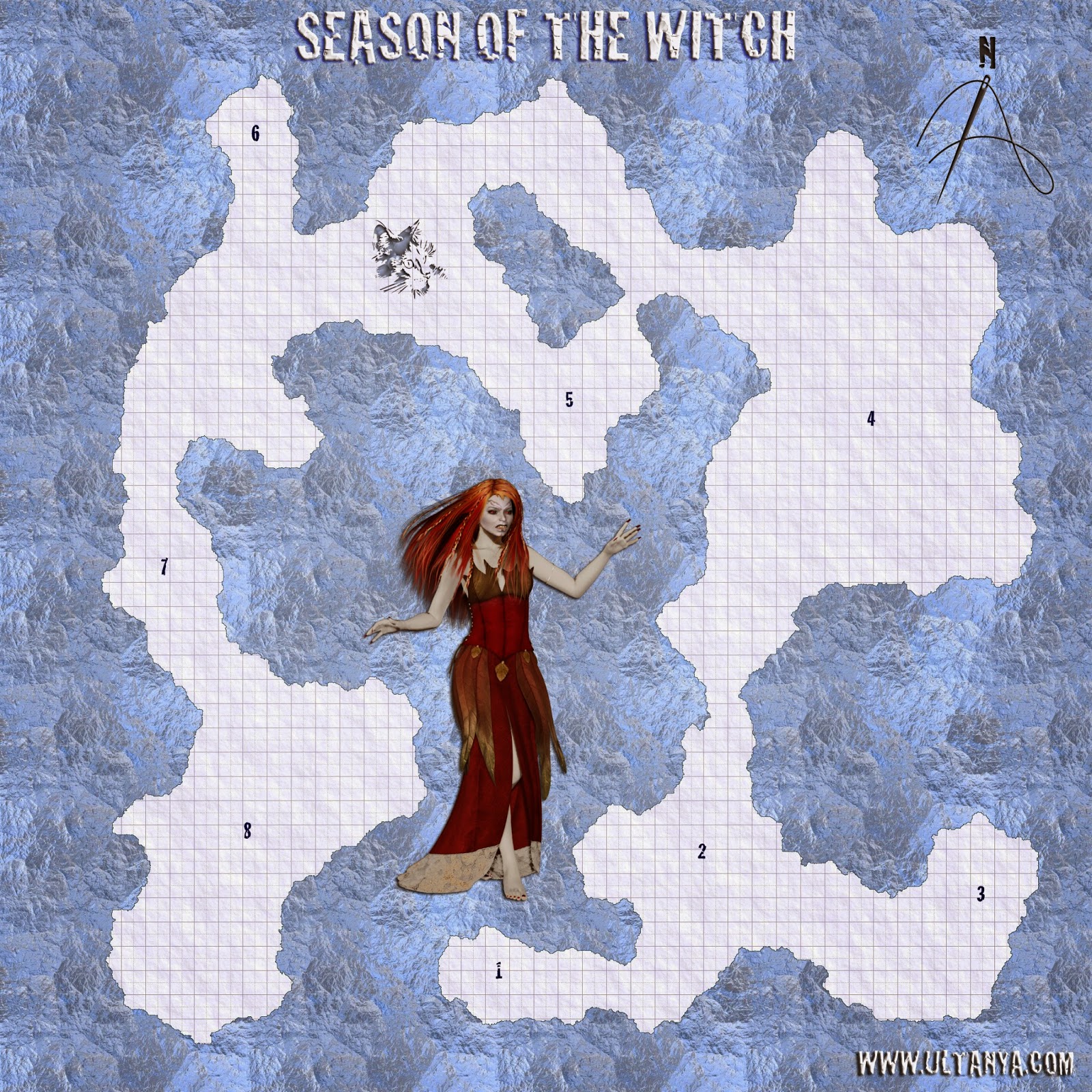 1.    Entry: Frozen droplets on cobwebs; leering faces carved in ice; unnatural chill. 1d2 rounds after entry the faces will animate with a magic mouth and proclaim, “Interlopers your bones will be snapped like frozen twigs. Leave this place!” If the PC’s leave and re-enter the warning will occur again.

2.    Cold Reception: Long table covered in ice; six chairs with seated suits of frozen (posed as if eating) armor; faded banner collection; faintly working ever-burning torch. Nearing the table will animate the skeletons (6) which occupy this chamber. Each is wearing plate mail armor and fights with the skill they had in life (4th level fighters). Inquisitive PC’s will be able to determine the banners are death shrouds and these were all knights in life who were apparently exhumed and animated. One of the skeletal knights wields a +1 sword named Quintessence (see new magic items).

3.    Alchemy Storage: Wooden shelves crammed with bottles; large bubbling stone bowl; toxic smell. This room is used by the witch to create magic potables. There is a 30% chance for every 10 rounds spent searching the shelves the PC’s will find a rare spell or alchemy component. The bowl in the center of the chamber is a Cauldron of the Witch.

4.    Ursine Guardian: Clusters of ice stalactites; thick clumps of white hair; ice with deep claw gouges; foul animal odor. This massive chamber is the lair of a Dire Polar Bear (1) which is a long time guardian of the witch. The creature is aware of the PC’s and hiding behind a cluster of stalactites. Clever PC’s searching the room may see its reflection off one of the faceted ice walls and avoid being surprised. Amongst the bones of victims can be found 200gp, a potion of water breathing and a cursed -2 dagger.

5.    Reliquary Portal: Columns of magically carved ice; burnt offerings; demonic sigils; heavy air which sparks occasionally. Those skilled in the arcane will sense that dark rituals take place here to open portals to lost places. The runes on the floor indicate (read magic) the witch recently traveled to the lair of a beast named Krampus to trade with it.

6.    Sanctuary: Ice covered bed; small table and chairs; collection of scarfs; animal furs on walls and floor. The witch is here waiting in ambush under one of the largest animal furs. She counts as a 6th level wizard for purposes of spells and abilities. If the battle begins to favor the PC’s the witch will retreat via a Dimension Door scroll to seek out the Yule Cat. She will then lure the beast to her lair with promises of a delicious feast of heroes with old clothing. Any PC who gifts a companion one of the witch’s scarfs will avoid this fate. Under the bed is 1300gp, a wand of lightning bolt (4 charges), and a Bag of Krampus.

7.    Blocked Passage: Hazy ice wall; frozen blood stains; strange pulsating in the area. The wall is actually a massive Ice Cube (1) which guards the area. This creature is a gelatinous cube with the consistency of sloshy ice. Any target trapped inside the cube suffers cold damage instead of acid. Fire based attacks are particularly effective against an Ice Cube.

8.    Prison: Piles of bones; shackles and weights; filthy straw mats; stacks of old clothing; odor of excrement. The PC’s will find the corpse of the tailor here frozen in the corner. The witch has been subjugating villages for decades and the remains of victims here represent that. Enterprising PC’s will find a way to use the clothing here to protect the village from the fate of the Yule Cat.

Yule Cat
This evil fey creature does not even need to be represented with any statistics. However I have provided below an example of how devastating it should be using the fifth edition rule set. This is not a creature meant to become another notch on some warrior’s sword. Rather a holiday tale sung by a hearth about a witch, a cat and the kindness of giving a warm article of clothing to someone for the holidays. 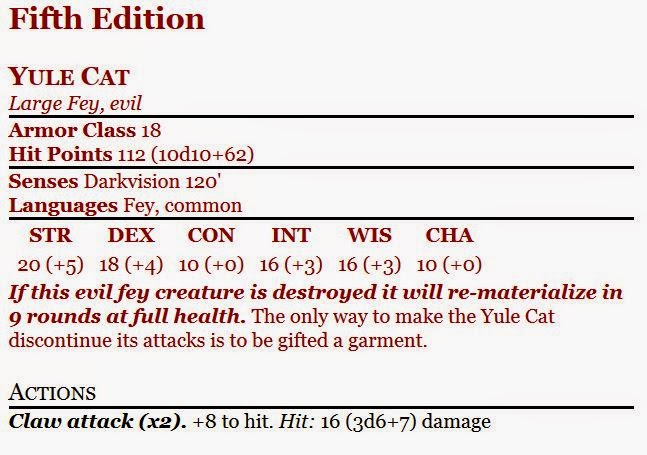 Quintessence
This +1 longsword when wielded imparts a selfless desire to help others. This will occur regardless of alignment although the help could be imparted through good or evil acts. When acting to help others Quintessence becomes a +2 sword which criticals on a 19-20. The DM is the final arbiter of when this bonus should be applied.