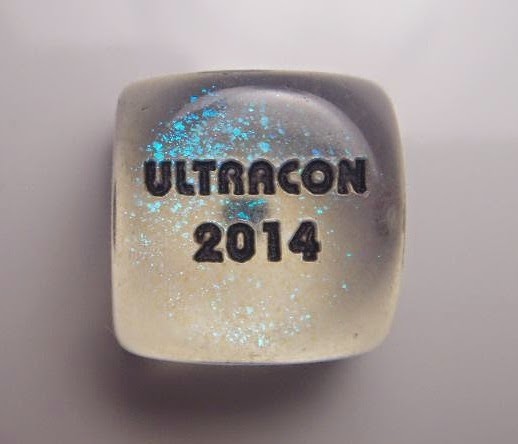 Some if you may be wondering why my blog went dark (pun intended) for the last few weeks? Between family vacation and convention preparation I was extremely busy. For some background since 2012 I have been organizing a private game weekend called Ultracon for family and friends. Life has a funny way of distracting us from our hobbies and the relationships we have forged over the years. Add in social media and we all feel connected but are we really? Nothing beats sitting around playing games and having a good time.

Ultracon has been a fantastic success and this past weekend I think has built the foundation for many more to come. Every year we always try to find some cool swag for the attendees. This year the goodies included vintage d20s (0-9x2), custom Ultracon D6s, a rechargeable +1 bonus chip and some gracious additions from Goodman Games.

Coolest of all however are the items crafted by the players themselves. This included beautiful hand embroidered dice bags, metal engraved dice boxes and two cases of home brewed beer with a keepsake bottle. For today’s post I plan to focus on the beer as it has a game element you may want to add to your own campaign world.

Ultanya is a realm I have been creating for thirty years and during that time I have added many wines and spirits. One of the players in our circle is quite the beer aficionado and had the idea to bring some custom brew to Ultracon. As a fellow imbiber and indulger of liquid bread I was instantly on-board with this idea! I was invited to help during brew day which was a very educational experience since my knowledge did not go beyond the label of most bottles.

The recipe chosen was an English Dark Mild which is well known for low alcohol content and a very mild finish. Since our attendees all had eclectic tastes this would prove to be a good choice as everyone enjoyed it. The pilot brew actually won 2nd place in a local home brew competition and was praised by several brew masters. 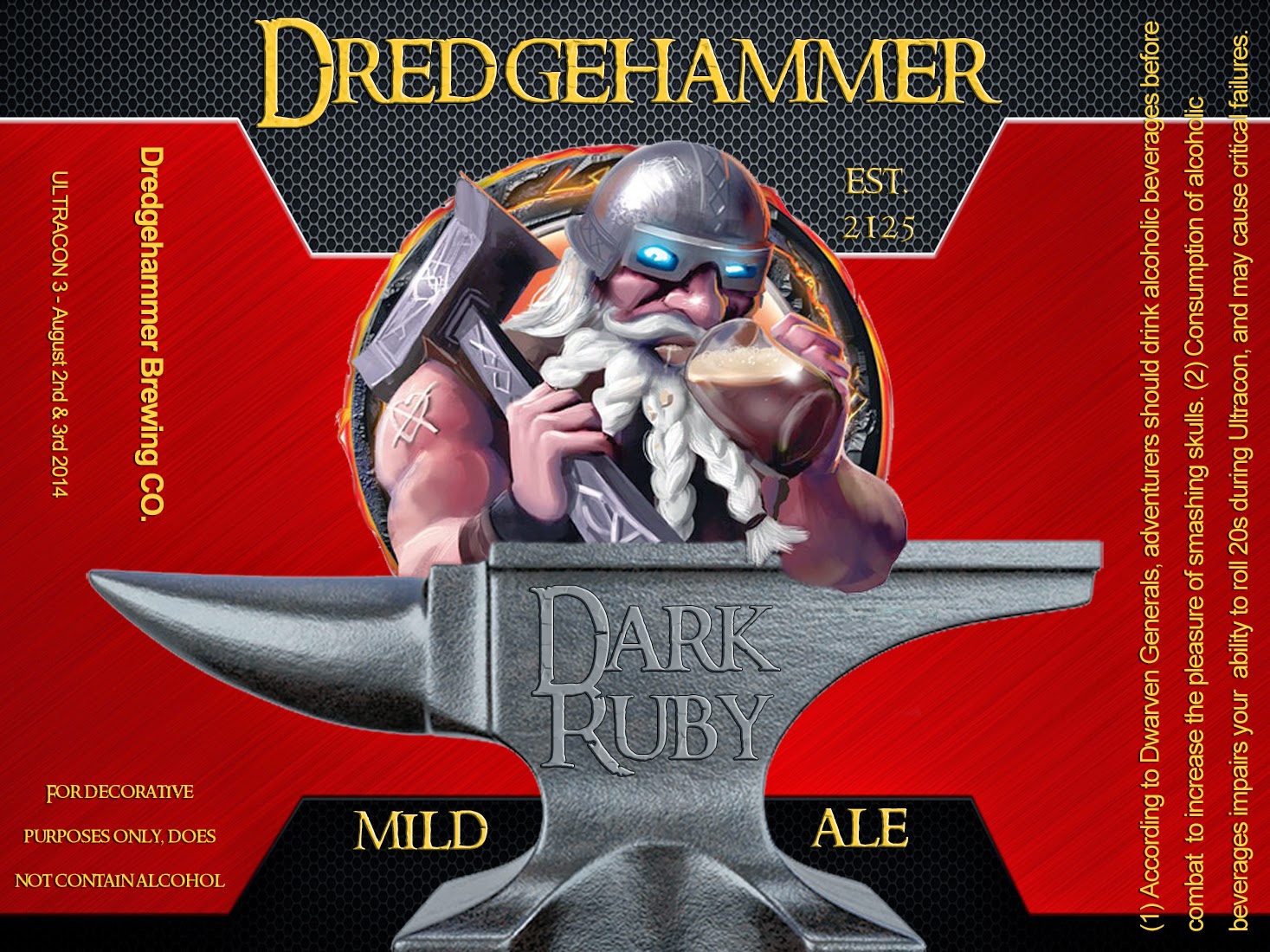 I was so impressed with the effort being put forward with this project I just knew it needed a permanent place in my realm. I went to work on some back story and created a fun label. So without further ado let me introduce you to Dredgehammer Dark Ruby Mild Ale!

The Dredgehammers are known for their talents with barley and hops. Realizing that traditional deep ales were too strong for the non dwarven palate the Dredgehammers decided to make something unique for export to the surface world. The result is their immensely popular Dark Ruby Mild Ale.

The brewery was founded in 2125 by Lien Dredgehammer deep in the halls of Arbangaz. Originally self-distributed, Lien and his family bottled and delivered all of the beer to the dwarven market for the first forty years. By 2165, the Dredgehammers were shipping more than 500 barrels annually to surface kingdoms.

For the next several hundred years the Dark Ruby Mild Ale was perfected and continually exported.  In 3002, the Dredgehammer’s opened a new production brewery on the surface world. This facility has seen dozens of major additions since then on a 16-acre site. Beers and ale are now brewed on a 50-barrel system with a total annual export capacity of more than 10,000 barrels.

Dark Ruby Mild is still their best seller and frequently found in taverns of mid to high quality. The alcohol content is very low (by dwarven standards) which is appealing to both the imbiber and of course the seller’s coin purse. Grainy to toasty caramel malts, low carbonation and a nearly still, bubbly head are defining characteristics of the brew. Colors can range from brown to dark red.

Game Information: Consumption of a pint of Dark Ruby Mild Ale will grant the drinker +1 to Wisdom Saves for 30 minutes, but at the end of that time the effect is reversed for the following 30 minutes. 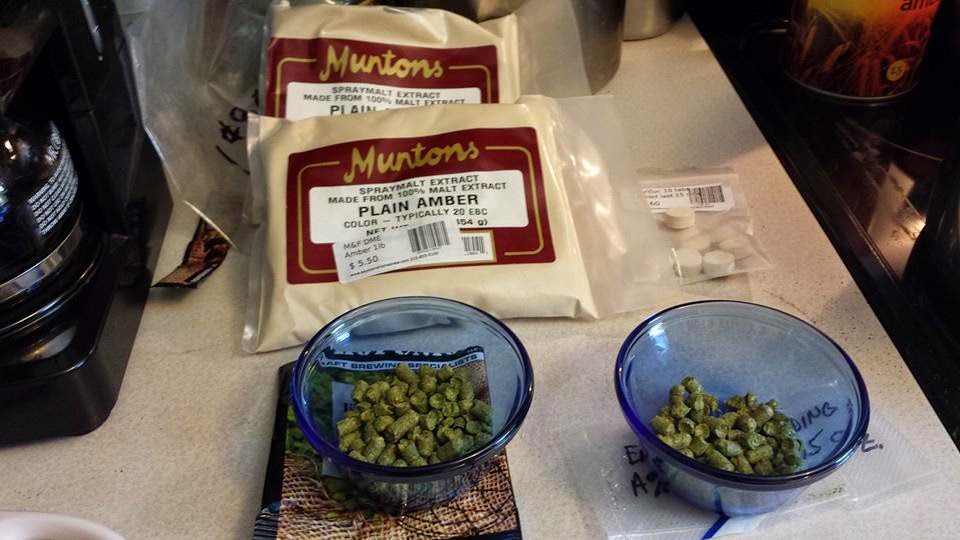 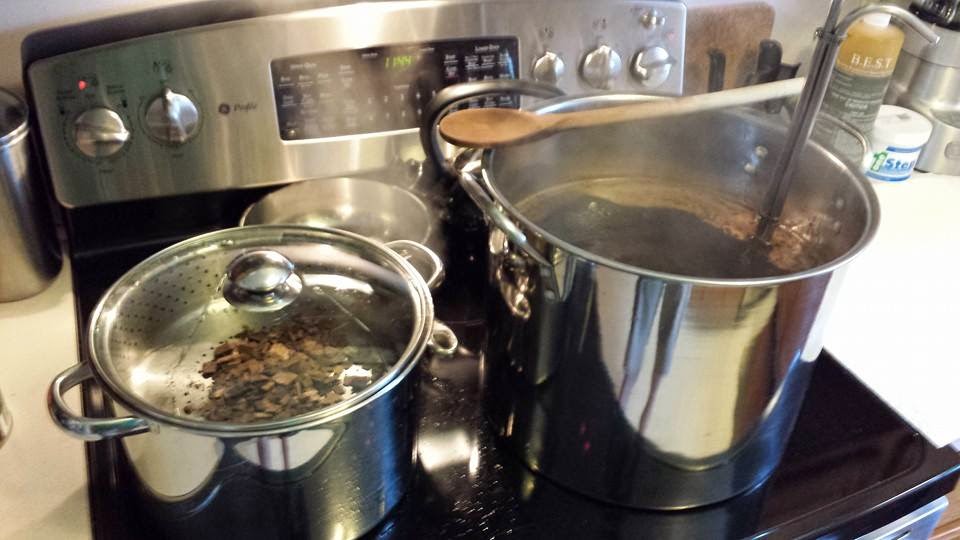 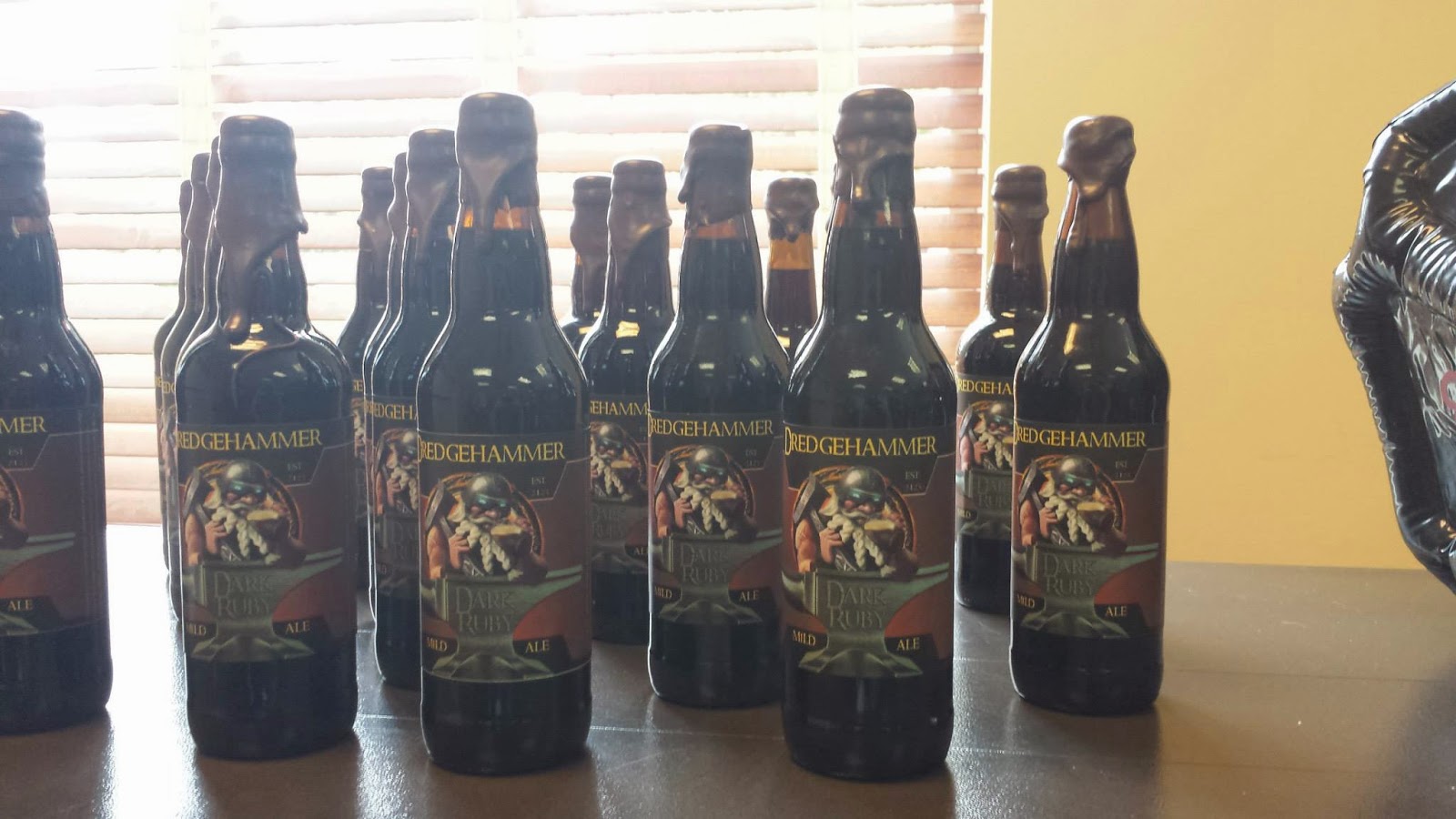