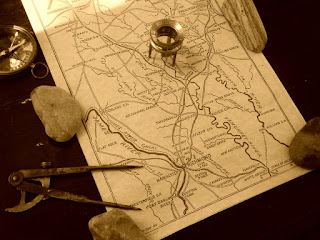 This past weekend my family and I spent the day at a Civil War reenactment. Many years ago I was involved in Civil War living history in Gettysburg during the summer. I personally love the time period and hope to get back into the hobby now that my children are getting older. Of course while at the reenactment my mind kept wandering to potential gaming scenarios. As a big fan of Black Powder, Black Magic I decided to create one. With the announcement of volume #3 and several articles addressing black powder, I thought it appropriate to post this home-brew scenario I whipped up.

This short 0-level funnel for DCC RPG is set during the mid-point of the American Civil War in the year 1863. The players will assume the role of men and women traveling to a remote recruiting garrison. Some are going to volunteer for service and others are delivering supplies. Unfortunately for the PCs all the soldiers in the garrison are now undead. Constructed on top of a vein of demon ore, something was released into the garrison causing this supernatural calamity.

The garrison can be placed anywhere in the States or Dark Territories. For purposes of this adventure the garrison soldiers do not know they are undead. They still perform their daily soldiering duties but with decayed minds. The commander of the garrison is Captain Simon Buckner. The captain is duty bound and was known in life for shooting deserters, something that continues in undeath.

When the PCs arrive at the garrison it will be in the middle of the night. A terrible stench of decay will permeate the area. Although nauseating, odors like this are not uncommon during this time frame. The garrison is small and consists of a palisade surrounding a few buildings. A large sign with an arrow points to the recruiting station. The garrison will appear to be deserted but a flickering light can be seen emanating from the shuttered windows of the recruiting station.

Inside the PCs will find Captain Simon Buckner, his back to them, seated at a desk. The reek of death is almost palpable here and flies buzz around the entire room. Once he is addressed the Captain will turn around revealing his emaciated and rotted countenance. The Captain has absorbed the bulk of whatever foul essence was inside the demon ore.  He is now considered a patron level creature, known by his men as The Old Soldier. As such the Captain is immune to mundane attacks, and any attempts by the PCs will be fruitless. 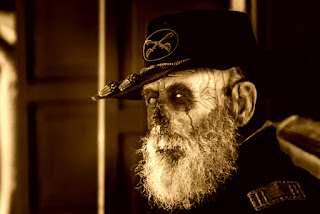 The Captain will demand the PCs sign their recruitment forms and prepare for the company surgeon to perform a medical inspection. At this point the characters should be terrified and running for their lives. When they spill out into the garrison more soldiers in various state of decay will start to appear. The Captain will follow screaming the PCs are deserters and commanding his men to kill them.

If the PCs stay and fight it should be a slaughter. The garrison has thirty undead Union soldiers and of course Captain Buckner himself. One takeaway of this adventure is to expose PCs to The Old Soldier so he can be used as a recurring villain in a future games. As most BPBM sessions occur in 1880, legends of The Old Soldier could have been passed down to the next generation. Below please find several encounters to use as the PCs try to escape the garrison soldiers.

1. Undead Infantry Attack. Several of the rotting soldiers pursue the PCs. Although they shamble some and can be outran, their Springfield rifles have a long reach. The undead never tire and will track the PCs all night, able to smell the warm blood coursing through their veins. They will march is close formation; fire volleys when possible, and fix bayonets if melee occurs. 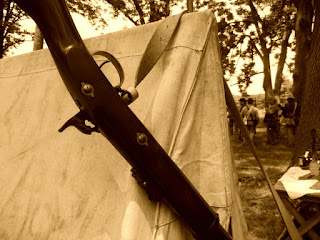 2. Undead Artillery Battery.  This unit is setup on a low ridge with a clear view of the valley leaving the garrison. It will fire the cannon on the PCs if they are being pursued by any infantry from their company. They are using shrapnel rounds with a bursting charge which consists of 75 iron balls. The cannon has a range of 400 yards and will be fired to explode some 15’ overhead of the PCs. Each time the cannon is fired the PCs must make a DC12 Reflex save to avoid the bursting rounds. Those which fail take 1d30 damage. If the PCs cross the valley and charge the artillery position, the crew will defend the cannon. Anyone with the appropriate background (Artilleryman, Gunsmith, etc.) may be able to operate the cannon with some help. 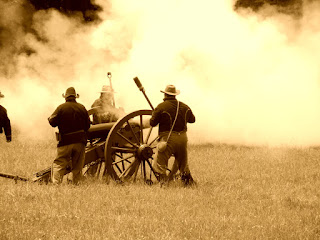 3. Sacred Cabin. A storm will enter the valley causing a down pour of rain and lightning strikes. The weather will hamper the PCs greatly and also risk potential death. Every round the PCs stay traveling in the storm there is a cumulative 5% chance of a lightning strike which causes 4d6 damage. Those looking for shelter will notice some nearby ruins. One of the buildings appears to be an old wooden cabin with a serviceable roof. The inside of the cabin is Spartan with a filthy old mattress, broken desk, and ash filled fireplace. Unfortunately, it was built atop a sacred burial site of a local Indian tribe. The combination of the storm and undead activity in the area has awoken a violent spirit. When the storm passes the PCs will find the remnants of a haunted bivouac site outside.

4. Powder Mill. Perched nearby a river is the old Croxton Powder Mill. Several accidental explosions in 1861 closed the mill permanently. The orders for powder far exceeded what the little mill could handle and greed cast safety aside. With the garrison soldiers still in hot pursuit, this large building is a perfect place for the PCs to make their last stand. All walls are constructed from stone and still sturdy. The inside is mostly devoid of anything but enterprising PCs will find barrels of powdered charcoal, sulfur, and saltpeter.

Anyone with the appropriate background could lead the group into making some makeshift powder kegs. Since this is the final encounter let the player’s use their lobby GM roll liberally. Allow the PCs to create 2d30+28 damage points of powder kegs before the garrison soldiers siege the powder mill. They can divide the points up into different increments per keg, with a minimum of 10 points. When they explode anyone in a 30’ radius takes the damage, DC12 Reflex save for half.