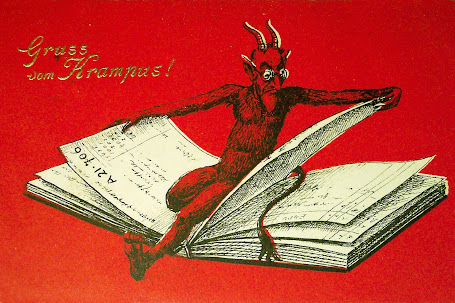 So what does Krampus leave inside the shoes or boots of good little boys and girls? Since the winter months are so harsh and unforgiving, he usually gifts them with minor enchanted items. These items have limited use before becoming mundane keepsakes. Often their magical ability is not even known by the owner and believed to just be good luck. Superstition and mystery surrounds the curios as many run to see what was left for them when the sun rises. These items, however, are not just for children and can be left for adults. Additionally, they can be used for any Krampus scenario you create as fun one shot treasures the players find. So dig out that much maligned d12 and see what was left in your shoe!

1. Badalisc Trinket. This odd looking toy is wrapped in goat skin and has a visage which includes a big head, two horns, a toothy maw, and gold eyes. According to legend, if the actual Badalisc is captured, it reveals all a town’s gossip to prevent bad things from happening. This particular curio will make a one failed Charisma based check become a natural 20.

2. Perchten Charm. A strange looking animal foot of no discernible origin which has been shrunken and dyed. The Perchten are the entourage of Perchta, an old god of the wild. These animal fetishes are known for their ability to help lost creatures. The charm will work as a compass to find any animal or beast one time before becoming mundane.

3. Wassail Apple. Old Norse has a saying which goes ves heill or be in good health. These spicy red apples are enchanted so that one can be used to make an entire bowl of punch. It creates 1d4+4 servings of a magical liquid which will remove a single disease or make the imbiber immune to one disease exposure for up to a year’s time. The apple and subsequent unused punch will vanish after one week.

4. Joulupukki Figure. This small wooden toy resembles a goat with a long beard wearing a fur-trimmed red bag of gifts. Well-behaved children often receive this curio from Krampus and it’s not unusual for some to collect them. The curio allows the owner to wish for one minor item and it will appear nearby. Nothing of more than 1 sp in value can ever be summoned.

5. Eight-Legged Horse. Modeled after Sleipnir from Norse mythology, this wooden toy is a rare gift to receive from Krampus. As a symbol of great speed, these curios are favored among those on hastened journeys. Legend holds that Sleipnir could travel through land, sea, or air and between worlds. The curio may be invoked just once to instantly travel up to one mile so long as the destination can be visualized.

6. Pine Golem. A favorite of children, these dolls are crafted from pine cones and usually wear pretty dresses or faux armor. When placed under sunlight, the dolls will animate and walk around imitating anyone nearby. This, of course, creates all sorts of giggles and amusement, based on who is being shadowed. Pine golem antics last an hour before their enchantment diminishes completely.

7. Jól Wand. This piece of oak is decorated with sprigs of fir, holly, or yew and carved with various runes which ask for warmth and protection. It is well known these are gifted by Krampus when the winter will be particularly harsh. When receiving a Jól wand, it is best to be conservative when using it. 1d4 times it may be invoked to start a blazing fire with a simple touch, even with wet wood and kindling.

8. Solstice Orb: The return of the light after the long bitter winter is something celebrated by many northern villages. This small piece of clear glass is roughly shaped like a ball and fits in the palm of the hand. If tossed against a hard object, it will shatter, illuminating a 40-foot area with soothing light. This radiance will even pierce magical darkness and last for one hour before expiring completely.

9. Hammer Pendant: These T-shaped charms are thought to be ancient depictions of the Norse Mjölnir. Krampus has been known to gift three different types, which vary in value of iron, silver, and gold. These are greatly prized by hunters for another reason, however. The pendant will guide one arrow to unerringly strike before becoming mundane. The ability to return home with food during the winter months is priceless.

10. Tomte Bowl: According to old stories, these wooden dishes were crafted by mischievous sprites. They appear to be the head of a bearded elderly man. A bright red cap serves as a lid to the bowl, and when removed warmth will issue forth. If butter is placed inside the bowl, it will immediately fill with nourishing hot porridge. This ability may be used 2d4 times before the bowl becomes completely mundane.

11. Draugr Effigy: This wooden sculpture resembles a withered corpse bound in rope. During winter the undead and worse things are known to walk again. The effigy is activated as a ward if it senses undead nearby. This magical protection afforded to the owner lasts only one hour before permanently being diminished. During that time, weaker undead will be oblivious of their presence with stronger undead disinterested and intelligent undead cautiously indifferent.

12. Holly Ringlet: This magic laurel is crafted with boughs of glossy green foliage and bright red berries. As legend goes, placing this enchanted ringlet over the mantle invites fairy folk into the home. This is not cause for concern as the fairies enjoy the warmth of the fire and the shelter from the cold. 1d4 fairies will be summoned, which equates to how many days the house will be under a Protection from Evil spell. 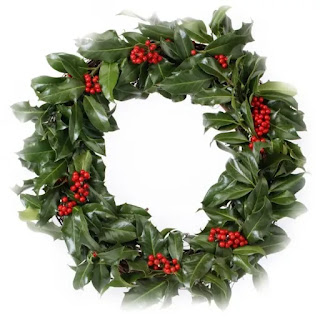 This article was originally featured in my 2015 zine, Tales from the Game Tavern