Dungeoncaching: "Take something, leave something." 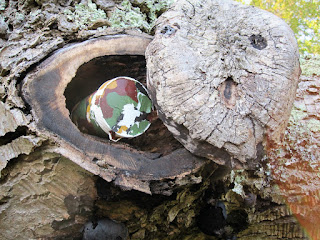 Last year I started Geocaching with my family to get the kids out and exploring nature. For the uninitiated this is an activity very similar to Letterboxing where you basically go on a scavenger hunt. The difference is you use GPS to find the general area of the cache. This also allows you to record your finds via an app and comment on the difficulty of finding the cache. A typical cache contains a small log book and pen (always bring your own) and often a little cluster of interesting items.

One of the unwritten codes of geocaching is "take something, leave something." As people find the cache, they exchange treasures so there is always something for the next person to find. This summer my family and I plan to hide a few caches of our own which will contain polyhedral dice. Hopefully those interested in the curious 20 sided dice will investigate the types of games they are used for!

This all gave rise to the idea that adventurers exploring vast mega-dungeons would do something similar. Often RPG sessions are limited to smaller environments which may never be visited again by the player characters. Or maybe there are several sessions in one location but the action is usually moving forward in some fashion. This is often because of scheduling issues, time constraints and just the complexities of life in general.

However it is quite possible to have a campaign revolve around a mega-dungeon theme for quite some time. In these situations the ecology of the location constantly evolves. Monster lairs change hands, different factions gain control of certain areas, adventurers plunder certain hoards, or magical and natural effects alter the setting. These sorts of occurrences are what make a large mega-dungeon theme come alive in the sense that it’s not a static environment.

Therefore it would be quite believable that previous adventurers left behind both for themselves and others small caches of supplies. They would usually exist in a place that is hidden or which was once a safe haven. Maybe there is a well-known type of graffiti used by adventurers or guilds to mark these caches? Or perhaps the local town used for supply has a posting board and crude map with alleged cache locations? The same unwritten code of "take something; leave something” would be used in dungeon-caching.

Now this idea need not be limited only to large subterranean areas of exploration. There could be dungeon caches in the wilderness inside some old hollowed out tree, under the floor boards of a tavern, or even in the rafters of an abandoned home. A dungeon cache is also a great tool to use when running multiple groups through the same campaign world. Maybe group A left something for group B to find when it’s their turn at the table? Finally a Dungeon cache is perhaps one of the easiest adventure hooks you could ever use since it could be clues to anything. Below I have created a table which includes examples of dungeon caches adventurers may find.

1. Hidden under a large stone is a small wooden box covered in phosphorescent mold. When opened the player characters find three vials filled with a glowing liquid. These each count as a Light spell if carefully poured onto an object. One has been leaking for quite some time hence the illuminated mold.

2. A secret door gives away to reveal the scene of a battle long ago. The skeletons of several humanoids are piled in a corner and an old fire pit exists in the center of this small room. Against the far wall leans two bed rolls, several folded blankets and a worn leather pack. Inside the pack the player characters will find three Potions of Healing and several bottles of wine. 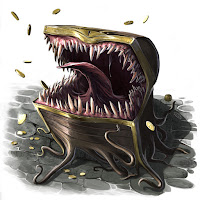 3. A hidden tunnel leads to small natural chamber of stone and moss. Inside rests a perfectly clean iron chest waiting to be opened. Unfortunately for the player characters this is actually a Mimic that has been using this cache as a feeding trap. Nearby and completely covered in moss is the actual dungeon cache chest. Inside will be several loaves of calcified bread that when broken magically turn fresh again, complete with butter and wonderful aroma. One piece of this magic bread counts as enough sustenance for an entire day.

4. This cache appears to have been constructed by dwarves and uses an elaborate set of weights and pulleys to reveal. Inside is a veritable supply store containing rope, hooks, and lengths of chain, nails, pitons, shovels and small hand tools. Additionally there are several swords, axes and warhammers available. In dwarven written above the cache is the warning, “Take what ye need, but heed, Moradin sees, so please, leave behind, something to find” If the player characters only take items and leave nothing of value they will be cursed by Moradin for 24 hours with -2 to hit on all attack rolls.

5. This dungeon cache is a tiny cloth bag which is hidden inside a niche in a stone wall. The initials R.V. are embroidered on the bag in faded gold thread. Inside the player characters will find several Goodberries of surprising power. Anyone investigating will notice the niche is filled with a strange crystal which seems to be empowering the goodberries.  Each berry will heal 10 points of damage when consumed. The caveat being if they are more than 15’ away from the crystal niche they turn to dust. Any attempts to remove the crystal niche will destroy it. Consuming the last goodberry also ends the cycle permanently unless a newly summoned goodberry is placed inside the niche. The niche takes one full week to empower any new berries.

6. Hidden beyond several secret doors and false caches is an area that is very well stocked for serious exploration. Amateur adventurers or wandering monsters would almost never find this location. The actual chamber is 30x30 and contains an ever-burning hearth which only gives off heat and no smoke. Additionally there are several bunk beds, foot chests with blankets, and a stasis bubble containing a large quantity of food stuffs. There is also a bottle rack which contains a dozen of every common magic potion type and perhaps a few rare ones. A log book and sign-in sheet lay upon a table with ink and quill. If not signed properly and stock accounted for the room will teleport the player characters 2d10 miles away from the dungeon to some random wilderness area. 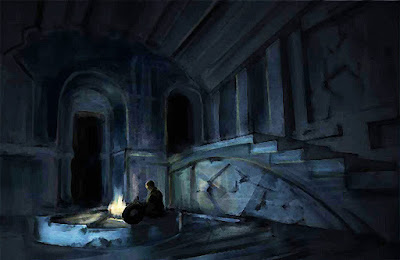 So do you Geocache or Letterbox? And if so what were some of the more interesting places you actually located one? And if you enjoyed the Dungeoncaching idea please reply to this post with your ideas for additional caches other Dungeon Masters can add to their own campaigns.
Posted by Grand DM at 12:10 PM