Back to the Future

With today being Back to the Future Day I could not help to reflect on 1985 versus 2015. Certainly role playing games have come a very long way from the witch hunts of the 80s. Now just about every facet of pop-culture phenomena has been touched in some way by my favorite game, Dungeons & Dragons. Back in 1985 I had been playing the game for a whole two years at that point. I definitely considered myself a seasoned dungeon master and wish I had some Polaroids of those early sessions. After all we were playing Advanced Dungeons & Dragons unlike some of the kids in the neighborhood!

I did manage to find a few of my old adventures scribbled on graph paper and jammed into a Trapper Keeper. How anyone survived those games is beyond me as they were loaded with every horror imaginable. Below is a 1985 clipping from Newsweek which really gives a glimpse into the ridiculous fear D&D generated: 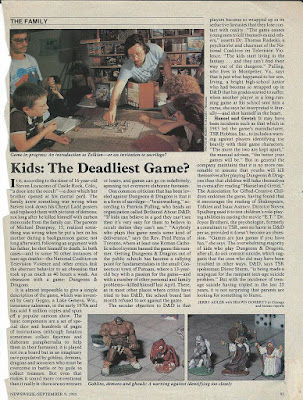 Back to the Future, we now know all that fear was completely unfounded and that role playing games are wonderful creative outlets. Other benefits include social interaction, teamwork, problem solving and mathematics. In fact role playing games are absolutely wonderful for kids! For adults role playing games allow us to exhibit skills we may not otherwise tap into on a daily basis. Things like leadership, project management and logistics. But most important of all is gathering with friends and family to help tell a story and use our imaginations.

In Back to the Future II Marty McFly read a paper which forecast certain things about 2015. Interestingly some of the predictions back in 1989 were correct about the future. So I thought what would a Dragon Magazine cover maybe look like if they added it to the movie? Hopefully this generates a chuckle of two for some of you today…and remember as Doc Brown said, “Your future is whatever you make it – so make it a good one." 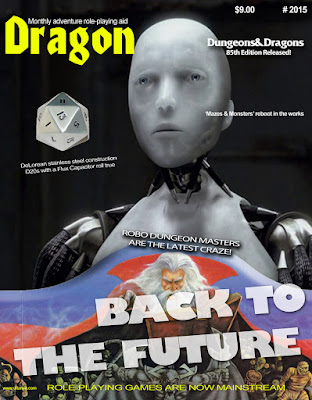